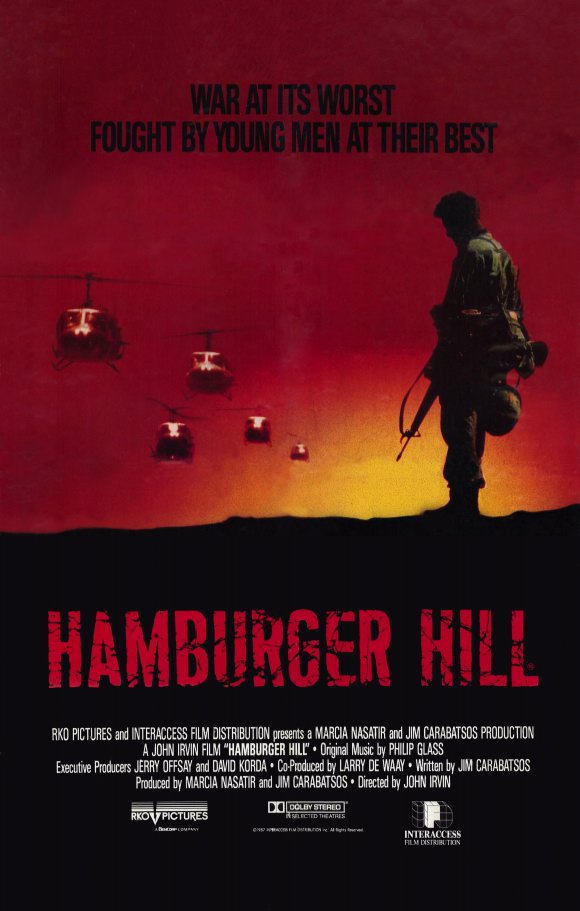 Like Full Metal Jacket before it, Hamburger Hill is a film in two distinct sections.

The film opens with new recruits just arrived from America to bolster the ranks of soldiers who are on down-time. This gives the recruits time to learn the ropes and realities of jungle warfare, which seem far removed from what they were told in training camp, and to acclimatise and settle in to a new foreign locale.

This apparently means the occasional ‘this ain’t no TV show, it’s real life’ speech from a seasoned vet, and regular visits to Mama San’s purveyors of fine beverages and many forms of ‘pampering’…

Then on the 10th of May 1969, the forces are summoned to take a hill. Not an especially important hill, more a blip on a map, but a blip so zealously guarded and so desired by both sides of the conflict that it became known as Hamburger Hill to all that fought there and survived. Which judging by this film was all too few.

Unlike Platoon the battle here is no slo-mo affair punctuated by dramatic moments and backed by an operetta, but a painful and often pointless grind up the same small stretch of inhospitable territory.

There are no big speeches, no pivotal moments and no acts of heroism more notable than the many others, just mud, blood and guts.

For ten brutal days the diminishing forces spend their days trudging up the same hill, usually with the same result, before spending the night counting the dead and healing the wounds.

The next morning they do it all again. They don’t set up someone to get taken out, nor show an indestructible hero who cannot die, so you never know who’s next. And make no mistake most die in this especially awful conflict.

This uncertainty is aided by the cast of no name actors, who although some have gone on to find fame since (Don Cheadle, Dylan McDermott) were all no names when this film was made.

The action is non-stop and especially violent but not in a cinematic ‘yee-ha’ way, no round the corner cool shots or amazing feats, just stab-bang-stab-bang reload with no pause for rest or pithy comments.

Of the three films Hamburger Hill is the least flashy and perhaps even the least memorable. It was most likely the closest to reality, and definitely the film that left me filled with feelings of despair and a prevailing opinion that war is futile and unfair to both sides.

Given that I have chosen to compare three films where warfare is the central theme, I must consider how I would feel if my son watched any of them in the future – and by future I mean in a dozen years or so. If and when this happens I want him to think war sucks too, not that it’s awesome.

So given that one aim I find Hamburger Hill as the best film surrounding the Vietnam War released in the 1980s.

Final Rating – 8.5 / 10. For anyone who ever wondered what it would really be like to be thrust into battle (and I can only guess myself thankfully), I think the opening scenes of Saving Private Ryan and the second half of this film should sum it up.