Usually when I review an ‘ilogy of some description I preface it with a brief intro about the franchise origins or something noteworthy.

But Behind Enemy Lines is so unassuming and entirely transparent that it seems a waste of time here. In fact the title itself tells you everything you need to know about the franchise.

That and that Owen Wilson and his broken hooter are in the first one.

Speaking of the first one… 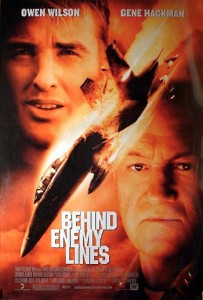 Burnett, like most aboard the aircraft carrier that they call ‘home’, is bored and skittish, thinking that merely being a presence isn’t providing the requisite action he signed up for. But unlike most of his countrymen Burnett is a fixin’ to do something about it, and he gives his two weeks notice to Admiral Reigart (Gene Hackman), who for his part takes the resignation with disdain.

It’s no coincidence that Burnett and partner Lt Stackhouse are scheduled for a reconnaissance mission shortly after on Christmas Day.

Now solo with the Serbian army on his tail lead by a man hunter so dogged that I dubbed him the Serbinator, the only question is will Burnett get out before either the bad guys get him or the so called good guys inadvertently cause his death through political red tape or one upmanship.

For a straightforward film like this is it surprising how lean and effective this is. There are a few genuinely cool and creative scenes – a ‘running from the chain of explosions’ stands out – and for such a low budget film I was amazed that the cringe factor remained at practically nil throughout.

For his part Wilson kept the adorable whiny under his breath dialogue at a minimum, and Hackman turned down the patriotism angle to a low flame until the very end.

There’s not too much to say about Behind Enemy Lines that the title doesn’t already tell us, but there aren’t many films where we know the end result going in that are as efficiently entertaining and compelling as this one.

Final Rating – 7 / 10. A solid no frills start. Let’s see how the next couple guys get themselves in (and presumably out of) trouble. 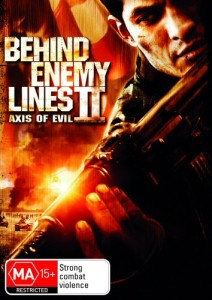 Behind Enemy Lines 2: Axis of Evil

While the first film was an unexpected surprise thanks to a couple clever scenes and an uncomplicated storyline, any thoughts that the sequel might recreate the magic are dispelled early, and Behind Enemy Lines quickly settles in to the straight to DVD sequel rut.

North Korea is being a spoilt brat, playing up, talking big and generally acting the bully. The US decides it’s time to make a lesson of Kim Jong and his diminutive cronies, and like any ill mannered kid North Korea don’t take being spoken down to well and react by threatening their little brother South Korea.

Then US intelligence learns of the fact that North Korea have missiles with long range capabilities that could reach major US cities. After some long and protracted meetings in war rooms and boardrooms the President of the United States (he’s white, can you imagine?) is torn between two choices, an act of war or a sneaky raid to destroy the missiles and make it look like an accident.

Despite the obligatory army high up lobbying for a full scale assault, the Prez opts for the more low key scenario, only to change his mind when a new development arises.

Unfortunately this political backflip arrives too late for a few Navy Seals already in mid air above North Korea, and they find themselves in a hostile North Korea in a mission that technically never existed, meaning there can be no formal extraction mission.

Sound familiar? Well aside from the title it isn’t.

Where the original film was a lot of running and hiding, BEL 2 is far more akin to Rambo 2, with a few good guys taking out hundreds of naughty NK soldiers amid a hail of bullets and perplexing epileptic seizure inducing editing that tries in vain to disguise how bland this all is.

The action criss-crosses between the politicians politicking and the soldiers soldiering to equally middling effect, with several flashbacks to training camp included to allow Keith David’s cameo just so they can put his name on the cover. Behind Enemy Lines is barely adequate, typically unnecessary and obviously rushed and made on the cheap, the kind of film greenlit in the knowledge that enough morons will check it out just because the first was ok…

If you need one last example of how rushed this was, consider the justification for an air strike to explode the missiles in a nuclear explosion even with the risk to the public; “the force of the blast might burn up the radioactive matter”. Really?

Final Rating – 6 / 10. If the normal pattern continues, the third film will be even cheaper, even sloppier, more violent and maybe a little more fun. 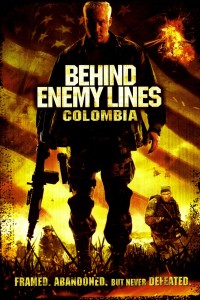 Well I was half right, because Behind Enemy Lines 3 might not be cheaper (though it sure isn’t big budget) and it’s surprisingly not that violent, but is sure is sloppier and – thanks to a total absence of logic and care – it’s far more fun than its predecessor, though probably not in the way the filmmakers intended.

The telltale sign arrives in the first 15 seconds, as the WWE Films logo pops up onscreen. Or should I say WWEeeeeekkkk!

As the second film took pains to do, the opening minutes take pains at clumsily identifying an enemy worthy of our distaste. This time it’s Columbia, what with its drugs and violence and such. Military Intelligence cops a bad name in these movies, and once again it proves a misnomer here. Intel reports have something ‘big’ going down the very next morning, and a recon mission is hastily arranged. The order being ‘all lookee, no shootee’.

A small team of 5 make the jump from a low flying plane deep in hostile territory, landing in the same stretch of water before emerging – in formation – within 6 feet of each other. This is either amazing soldiering or terrible filmmaking, and based upon what ensues I must think it’s the latter.

The mission starts out like clockwork. The team locate and scope out the meeting site undetected, managing even to wander up and eavesdrop on proceedings which seems to include a lovely cooked breakfast for all.

As the meeting continues a surprising development is announced, however this initial shock is immediately compounded as a large group of heavily armed men gatecrash the meeting – exercising far less caution and class – and gunning down all in attendance, leaving the Americans to take the blame.

With two men dead and one captured, only two brave Americans stand between conflict and justice, but they are stranded… Behind Enemy Lines!

Keith David returns as one of the only ‘good guys’ at HQ, hamstrung by the politicians and dopey brass who seem determined to make as many bad decisions as possible. Amazingly enough the army loses all contact with its own troops, learning of the debacle when someone flicks on the Colombian TV just in time to catch the story breaking on the news.

But if that sounds unlikely then consider this; the two surviving soldiers see their captured ally handcuffed on the back of a jeep surrounded by enemy soldiers as it bounces along the muddy jungle road. With too much movement to take a shot, the Americans – from several hundred metres – use an infra red scope to shine a small red dot on their mate’s forearm tattoo.

Repeat: Can’t shoot. Too far. Shine tiny dot on arm instead. From hundreds of metres. Target on moving jeep.

Of course the captured man sees the tiny dot, looks up and immediately catches the eye of his buddy, and nods imperceptibly.

Despite having no assistance from US intelligence and being forced to scrap the original plan entirely, these guys really seem to know their way around Colombia. Considering they start in the middle of the jungle it is remarkable how they manage to navigate with ease, moving to the prison, then to the hospital and then back to the extraction point.

They are also incredibly I resourceful, tracking down the General on his mobile phone after all other avenues of communication are taken from them. When the General asks incredulously how they tracked him down, he is informed that they had to call his wife to get his number, which really begs the question, “so how the fuck did you have my wife’s phone number then?”

I hope it is obvious now that this sure is one terrible film, but thanks to these logical lapses and ridiculous developments it manages to be more inadvertently amusing and fleetingly entertaining than the second film in this series.

A franchise that would have been far better served if it ended after the first flick.

Final Rating – 5.5 / 10. Is it selfish to hope for World Peace just because an end to all conflict will give no reason for anyone to make Behind Enemy Lines flicks? 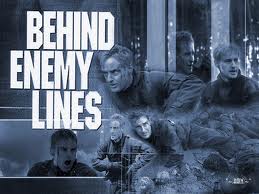 Final Trilogy Rating – 6 / 10. If this seems high just remember that a 6 represents ‘just a film’. In reality these films are harmless in the same way as the Sniper series was.

In fact the two trilogies are remarkably similar. They start with a generic and silly little first film that overachieves its way to respectability, then overestimate their staying power by thinking the concept a second effort. By the time a third film arrives it is tinged with desperation and the vain hope that name recognition might fool enough punters to fork over their hard earned – even if just for familiarity’s sake.

This is less a trilogy than an unexpectedly competent film that somehow spawned two inferior clones.

The second and third films might have the bits worth talking about, but the only film worthy of your time is the first, and only a couple of standout scenes separate that from the pack.

While I try to throw a joke or two into proceedings when I can all of the opinions presented in my reviews are genuine. I don't expect that all will agree with my thoughts at all times nor would it be any fun if you did, so don't be shy in telling me where you think I went wrong... and hopefully if you think I got it right for once. Don't be shy, half the fun is in the conversation after the movie.
View all posts by OGR →
This entry was posted in Film, Movie Marathons, Movie Reviews. Bookmark the permalink.