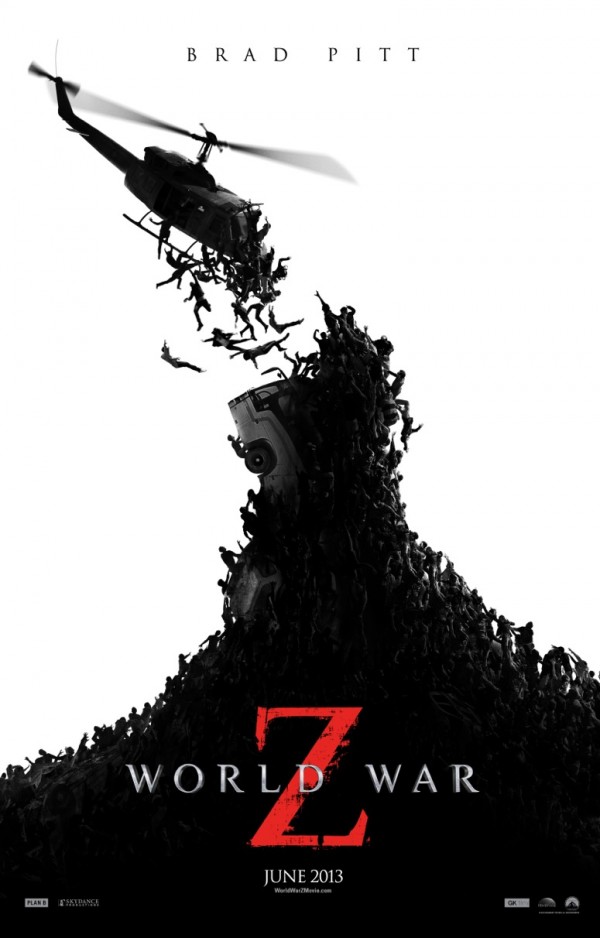 Gerry starts a normal day in the Lane family existence. An early alarm, brekky with the wife and two daughters and a little morning gridlock on the way to drop the kids at school. Things start going downhill with a broken side mirror. They get a lot worse quickly.

ZOMBIES! (Oh that’s what the ‘Z’ stands for in the clumsy title!?!) Fast moving, direct and extremely aggressive. A bite from an infected person seems to turn the bitee within seconds, and while being an flesh eater is an unpleasant thought, the physical benefits are obvious and astounding. These new undead Usain’s can leap over vehicles, scale 60 foot walls and in general disobey several of the basic laws of gravity.

Some people contemplate drugs to help them lose weight, count me in the (probably) increasing number of those ruminating on the increasing allure of zombification.

Gerry and family flee the city without a second thought, never seeming too astonished upon the arrival of hordes of violent infected mindless cannibals. While we learn that Gerry has a special set of skills that make him a nightmare for zombies like these, it always appears a little weird that people can move beyond the concept of zombies so swiftly in film.

Back to Gerry’s skills. Though retired, Gerry is tracked down by government departments specialising in dealing with the extraordinary and is tasked with escorting a nerdy scientist type to the area where it is believed that the virus was unleashed.  The mission takes Gerry away from the family and to many countries where he encounters people both living and dead.

There is precious little original material in this film, in fact the best scenes in World War Z are cribbed from others. The build-up is all Dawn of the Dead 2004, the music (yet) another Inception clone and there are many moments that remind you of the under-rated 28 Weeks Later.

With decent sources though the outcome is quite… competent, decent entry level horror for brave Brad Pitt fans. There is a moment where the swarming undead assault a walled city which effectively shows the power of an immense surge of (formerly) humanity hurtling mindlessly toward their target. The best comparison I can give to the look of this sequence is that of the ‘Flood’ in the Halo video games, which is to say that these zombies move in cool, but hardly realistic, ways.

Pitt needs to do little more than remain stoic and determined. He only busts out the ‘Brad Pitt is perplexed’ look a couple times (the best example is when he is wrestling with the decision to kill John Doe). Brad’s hair actually handles most of the acting. When it is pinned behind the ears we know that all is OK for now, when it emerges from behind the ears and dares touch those flawless high cheekbones, things are becoming tense, and should it – even momentarily – move across those beautiful eyes, we know the shit just hit the fan.

Elsewhere no-one else seems to be around long enough to make an impact, though special mention must go to the female French soldier who never complains whinges despite having her hand severed and never properly treated.

While World War Z might in fact be the 137th best zombie movie ever made, thanks to Brad Pitt’s name atop the poster it will no doubt be the biggest grossing. There is minimal profanity and from memory I can’t even remember any blood, not even when the Frenchwoman’s hand is severed does anyone dare shed the red stuff onscreen. And if they aren’t showing blood you can bet your bottom dollar that George Romero style eviscerations aren’t on the horizon.

That said as a zombie-cherry breaking effort it isn’t bad, though the director lifts from several other films to come up with his opus, and the most notable sequences are also undoubtedly some of the silliest and illogical on the big screen this year.

At least it’s a hell of a lot better than I Am Legend.

Final Rating – 7 / 10. Strange to think that Brad Pitt might be the reason millions will taste horror for the first time.