The Man with the Iron Fists (Review)

I love hip-hop music. I know quite a bit about hip-hop history and have definitive ideas as to what ingredients are required to make a ‘GREAT’ hip-hop song.

That doesn’t mean for one second that I have a chance in hell of making such a song myself.

RZA obviously loves his kung-fu movies – as anyone who has ever listened to a Wu-Tang Clan album can attest. He knows what he likes and seems to have ideas as to what he wants in his films and who might be ideal to star in such a film.

This doesn’t mean RZA has the capacity to make a ‘GREAT’ kung-fu movie. If anything The Man with the Iron Fists is proof that at least at this stage he can’t.

But RZA is famous and knows people in high places. He knows Quentin Tarantino – who produced this film. He knows Eli Roth – the guy who in reality is famous for being handsome and knowing Quentin Tarantino (I mean does anyone think the Hostel films are classics or his bit parts in Piranha 3 merit fawning and devotion?).

As a result of this pull The Man with the Iron Fists is the work of a man with more interest than skill, and the film is clearly the product of such an unfortunate blend of sincerity and amateurism.

At least this one has a decent soundtrack, with Wu-Tang peppered throughout.

Outside the establishment of ill repute are several gangs of even less repute, all with colourful names and seemingly most with animal themes. Hence we have the Lions who all have big hair (manes) and are aggressive, the Wolves who rock wolf hats and are sneaky and opportunistic, and the Rats who… like rats?

Further complicating already complicated matters is the arrival of Jack Knife (Russell Crowe), Mr Knife if you’re nasty, who makes a nice entrance to the brothel by grabbing three nubile women, filleting another client, and chewing the scenery throughout the film.

With the rival gangs in the small town edging ever closer to full scale battle the tension within the brothel rises, and the humble Blacksmith in the town is called upon to painstakingly craft new weapons for all.

The Blacksmith (RZA) is a quiet and reserved man, wanting only to fund the release of his hooker girlfriend Lady Silk (Jamie Chung) from the brothel so that the two of them can move away and be together. The Blacksmith wants no part of any violence or underhanded dealings. But even loners must eventually pick a side – even if it is their own.

The problems of this film are many, but perhaps the main one is RZA himself. Hell I don’t even like his voice as a rapper (his production is where his genius lies), but as a mumbling narrator he is frustrating, and as a mumbling quiet hero he is underwhelming. I understand as writer and director you can give yourself a plum role, just be aware that your own inadequacies will be there for all to see. 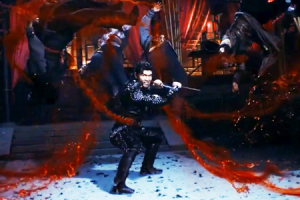 Another issue is the plot, I think I am obliged to make mention of a stash of gold, but for the bulk of the film that is hardly mentioned at all, with the action trying in vain to follow so many and varied colourful characters around the town as they are introduced. Unfortunately only a few stand out among the metal assassins, the human porcupines and the many animal themed gang members; the afore-mentioned Russell as Jack Knife and the Chinese Ziggy Stardust dubbed the Silver Lion, who is so cartoonish that he is perfect in such a film.

The Man with the Iron Fists is a kung-fu exploitation flick according to the RZA. It is gratuitously violent (to the point where it is more amusing than eye-opening), wilfully silly, visually indulgent and at times endearingly clumsy.

This is not the work of a master film maker, more an amateur with money and connections. The result is a film with a few decent moments and ideas but not the skill to continue them, in fact the opening credits may well end up being the most memorable aspect of the film in time. The film is saddled with many flat spots, too many characters vying for the spotlight and the charisma free performance of the RZA.

I could say here that The Man with the Iron Fists is ‘a work only for kung-fu and hip-hop fanboys’, but I am a fanboy of both, and try as I might I can’t see myself ever being a fan of this.