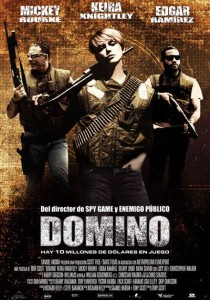 Domino Harvey grew up a privileged and sheltered daughter of English money, eventually becoming a catwalk model before giving up her life of leisure to become a bounty hunter.

Now Model / Bounty Hunter might be a winning combination for a business card, but somehow it never quite works out as much of a movie.

Keira Knightley plays Domino as headstrong, anti-social and driven. When making her informal ‘application’ to join a bounty hunting tandem she reasons that bounty hunters get to be involved in all the action, without the unwelcome repercussions of jail or death.

These words of wisdom combined with Domino’s unique ability to fill a pair of pants (though in truth Knightley could fit into a drinking straw), provides enough mystery for grizzled Ed (Mickey Rourke) and dashing and roguish Choco to take a punt. After all if she doesn’t prove to be any use, at least she’ll look good while she does it.

However Domino throws herself into the dangerous career path with gusto, throwing down when necessary and improvising on the fly, though there is a lap dance sequence that is all too gratuitous.

Of course soon word gets out of this bodacious beauty of a bounty hunter, and it isn’t long before Reality TV comes calling, headed by a producer played by Christopher Walken who wants to ‘tell Domino’s story’.

From this point the wheels pretty much fall off, and excellent director Tony Scott settles for a clumsy rip-off of his own True Romance, with some Natural Born Killers thrown in to dress it up.

The core of the plot involves an armoured car heist that embroils the law, the mafia, petty crims, stoners and the DMV (!) with the action moving between Los Angeles and Las Vegas. However while the action does indeed keep returning back to this plotline, in truth the story is all over the shop, and full of random cutaways and flashbacks than a season of Family Guy.

Based upon… well at least upon a real person, with the real Domino Harvey dying just prior to the film’s release, the film is way too long and equally unfocussed, full of aimless apathetic energy (if such a thing exists, Domino invents it). Like a 5 year old boy full of fairy floss it dashes this way and that, making noise and alternately amusing and annoying the viewer. While this is amusing in small doses, at two plus hours it quickly grows aggravating, especially as the film essentially becomes an ever more obvious replica of True Romance.

Unfortunately unlike Domino herself, the movie cannot get away with simply being hot. Quirks and cute stuff can always be forgiven if the subject matter is good looking (especially by guys), but try as it might – and it does – no amount of bling and makeup can cover up this film’s flaws.

Not even the trademark Tony Scott visual tricks and flashy distractions can act as the random lap dance that saves Domino from being a skinny emaciated mess.