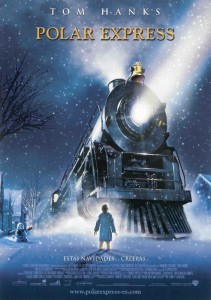 The Polar Express has a somewhat cliched Christmas story, some songs, some well realised -G rated – action moments, and scads of unnamed and slightly odd looking people, many of them voiced by Tom Hanks.

The central character is a young boy of perhaps 12, who one Christmas Eve is on the cusp of kinda, sorta not sure that Santa exists. No sooner does he entertain that thought than the magical Polar Express arrives unannounced on his front lawn, and the conductor explains that doubting boys and girls need only get on board for a one off trip to the North Pole on a voyage of discovery.

After some initial trepidation the boy hops aboard to find dozens of other kids all of similar age and wearing pajamas, having been plucked from their homes in the previous hours.

Along the long journey the boy meets several adults (as mentioned practically all voiced by Hanks) and all with a word or two of encouragement or guidance. The train itself has many mishaps and near misses, many of which require intervention from the kids to avert disaster, which begs the question; if the Polar Express’ main intent is to allay the doubts of young children about Christmas, why allow so many things that might kill a bunch? Surely that’s bad publicity for Mr Clause?

In all seriousness The Polar Express is full of magic, fantasy and wonder, with the obligatory ‘yay Christmas. Yay Santa‘ message that these films are contractually obliged to include.

The limitation of such a film is that you wouldn’t dare show it to a Santa ‘believer’ and wouldn’t risk converting an on the fence tween to the dark side, meaning only those ‘in the know’ are safe targets for this film. And when it comes to those kids, they probably are more interested in the latest Harry Potter or Twilight film than more computer generated pro Christmas propaganda.

Final Rating – 6.5 / 10. The Polar Express has some well realised action sequences – a couple of scenes have the Express taking routes a rollercoaster would shy away from – and some humorous and well meaning moments, I just think that the target demographic is too skinny for it to ever have made a big box office splash.