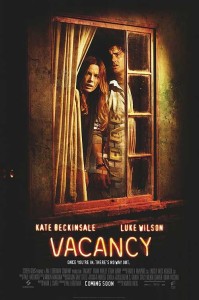 “Our careers aren’t out there either!”

Another Hostel style ‘wouldn’t it be horrible if…?’ film that is thankfully both light on the (unnecessary) gore and similarly lean on the running time.

In the first six minutes of the movie married couple David (Luke Wilson) and Amy (Kate Beckinsale) both prove that they aren’t the smartest people going around. First David swerves his fast moving car at high speed to avoid a small animal on the raod, putting both of them in great peril, then Amy almost immediately decides she must slice an apple with a sharp knife in the same moving car.

Then she is upset when she cuts herself, leading to the couple arguing.

Now with a busted car and apparently a marriage in nearly as rough shape, David and Amy decide to spend the night at the small and scungy yet available motel.

And let me tell you nothing brings a young couple mourning both their late son and their decaying marriage more than being targeted to appear in a snuff film.

… Did I let the kitty out of the burlap sack?

Well I wouldn’t have thunk it a huge shocker given the DVD proudly emblazoned just that all over the back cover.

In any case Vacancy is by the numbers. Once David and Amy realise what’s what (gee you crazy snuff filmmakers, maybe leaving the snuff films around so your guests can watch them prior to their own deaths might just be rubbing it in) they have only 40 minutes to appear frazzled, distraught and emotionally spent as they exhaust plans A through Y before Plan Z either works or it doesn’t.

And in reality anyone who has seen more than a few horror films has only 40 minutes to wait.

Besides, Wilson and Beckinsale share practically zero chemistry, so perhaps it wasn’t such a bad idea to split after all?

Final Rating – 6 / 10. Vacancy might refer to the future space in your DVD collection that this film opens up, because you sure as hell won’t be buying it.