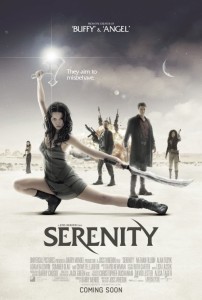 Quite the bendy one aren’t you?

The crew of the space vessel Firefly are a rag-tag bunch of glib talking space-hipsters who talk in the rapid fire way that the guys n gals on 30 Rock do. Quips fly left and right and no pithy comment remains unspoken.

It’s witty, ever so dry and frankly exhausting. I mean imagine having to end every sentence you ever spoke with a throwaway put-down or snappy comeback. That’s a lot of pressure.

But these alterna-Trekkies have no such qualms, they love the pressure and thrive on it, chilling and remaining super-cool even with the news that hordes of marauding angry skin eaters are rife across the galaxy and represent somewhat of a problem.

The Captain of the spacecraft is hipster Han Solo  Mal (Nathan Fillion), who is irreverent, fast talking, dry to the point of desiccation and… well I’ll just say it… GAW-JUSS.

When a frail young girl named River Tam happens aboard the ship none are aware of her abilities and the danger she represents, but they soon find out when an ‘Operative’ of The Alliance shows up announcing just as much. He is the anti-Mal, and is therefore stuck up, reserved and unlikely to ever appear at an Arcade Fire concert. He is also a highly skilled and equally emotionless killer who will do anything to protect The Alliance, which apparently includes taking River into custody or… other.

Mal is too cool for caring and stuff, but dammit he’s not going to allow this skinny waif model to be taken into the custody of the Man, so off they go with the Operative in pursuit. As the action intensifies and the pressure ratchets up, the comments become all the more casual and seemingly off the cuff, as if the crew members are oblivious to just how near death they actually are.

It’s weird to have an honest to goodness sci-fi flick without aliens or monsters but this is less Star Wars than it is a possible vision of the future. Based upon the cult TV series (which means no-one important watched it) Firefly, I must admit to never seeing the show and, based upon this evidence, will be unlikely to chase it down in the future. It’s not like I don’t like sci-fi but like Galaxy Quest before it, Serenity inhabits a sub-genre that leaves me cold. Unlike Galaxy Quest at least this film has some real entertainment value with some decent action and of course the dialogue, which although way too scripted to bring realism is often at least wryly amusing.

And for whatever reason I find Nathan Fillion effortlessly likable.

I can cop to seeing why others fall in love with this stuff – it’s in the brackets that inevitably follow every descriptor. Good-looking (but insecure), men and women (notice not one or the other) kick ass across the galaxy (but only because they have to, they’re not needlessly violent action morons y’know) and outsmart their foes at every turn (aww shucks, it kinda just came to me at the last minute. And always, always. ALWAYS, remaining ever so pithy (I know you are but what am I?).

Oh and the near mute skinny waif model kicks all kinds of arse and does the roof splits.

Gosh darn aren’t we all just so vulnerable, complicated and self effacing?

Final Rating – 6.5 / 10. Serenity is a welcome alternative to your Transformers and other BIG DUMB sci-fi like Starship Troopers et al, eschewing catch-phrases and cocksure bravado for real life people (acting just like we like to think we would do if in that situation).