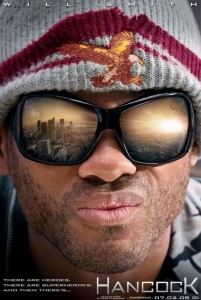 They might as well just forget a poster and write “Will Smith is in it”.

Hancock (Will Smith) is no different to many unfortunates that lurk in the corners of urban areas, huddled together against the elements. He is disheveled, dressed in rags, soaked in alcohol, profane and anti-social.

He is also a superhero…

…OK so maybe a little different.

Shunned by society due to his proclivity for causing more damage and destruction than he prevents in his action-packed superhero rescues and crime fighting, Hancock pushed back by openly resenting those he sometimes protects. He masks his loneliness with alcohol and his feelings with rudeness.

No-one likes him, but his amazing powers cannot be ignored, and he is often reluctantly called upon when all else fails because – collateral damage aside – he gets the job done.

Rumours are that Hancock is 80 years old but appears youthful as he doesn’t age, not since gaining his super-powers after a random knock to the head.

Ray (Jason Bateman) on the other hand is merely an obviously un-super regular guy pursuing his dream as a public relations and marketing guru – only he is struggling to convince potential clients that his ambitious and revolutionary method is the right way to go. Ray needs a frontman, a spokesman, a symbol.

Then Hancock emerges from nowhere to save Ray from an oncoming train (needlessly wrecking the train in the process), and Ray sees the alcohol reeking light.

In his efforts to convince Hancock that his bad image can be remedied by some expert tweaking, Ray takes him home to meet the fam; wife Mary (Charlise Theron) and their son. It is apparent immediately that Mary knows Hancock in a way that Ray is not aware of, but if Hancock realises he keeps it well hidden.

Ray convinces Hancock that the first step toward resurrecting his public image is admitting he has done wrong and accepting his medicine. This results in Hancock going to prison to start a two year sentence, reluctantly given he can simply fly off or break through any wall and wander off at any time.

Of course crime instantly goes up, just like it does every time Spiderman or Batman is temporarily exiled, and the calls for Hancock to return to save the day become louder.

It is time. But has the thinking time and Ray’s coaching been effective? (Come on, this is Will Smith we’re talking about. He simply cannot stay unlikable for long – it’s in his contract.)

So Hancock has a shave and puts on a super-suit, and suddenly he’s a top bloke. He even says ‘thanks’ a couple times.

Hancock can never escape the bounds of the casting, as mentioned Will Smith will not allow his personal nice guy image to be messed with, Jason Bateman is the personification of harmless vanilla, and Charlise Theron will always be liked… by guys at least. So any sense that this will be ‘edgy’ in any way can be forgotten before the film starts.

What cannot be forgotten – or forgiven – is just how quickly this film deteriorates. From meagre beginnings the second half of the film seems unbelievably rushed, like they admitted they didn’t know what to do after the ‘big twist’. So once it arrives (and I won’t spoil it here) there are essentially three scenes; twist, problem, climax. All with powerful (overbearing) music trying to sell what is little more than a 30 minute montage.

I hate it when a filmmaker slaps a few things together, overlays it with soppy music and expects me to get teary eyed over unlikable characters somehow being instantly reborn as ‘great guys n gals’.

Hancock has a dull plot with a confusing message that hides behind a frankly so-so twist. The jokes come through Will Smith being Will Smith and Jason Bateman being Jason Bateman – which is to say there are no jokes. In lieu of jokes are CGI hilarity in the same vein as such ‘classics’ as Little Nicky and Bruce Almighty.

Were it not for the presence of Will Smith this film would have sunk without a trace and without a profit. His mug on the poster ensured it made money despite its many flaws, and apparently justified a sequel due soon.

There needs to be some sort of law that prevents such bland movies being made, films that take no risks and merely exist, with the ticket buyers lining up for the guy on the poster, not the quality of the film.

Final Rating – 5.5 / 10. Hancock is dull as dishwater and just as memorable. Anyone who proudly lists it among there faves should be avoided at all costs.