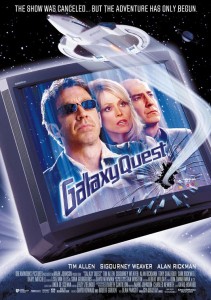 I’m already on record as saying I don’t understand Star Trek, so there was little chance that I would readily grasp a comedic homage to the series, full of in jokes, insider references and hooks only dutifully obsessed fans might acknowledge and appreciate.

The premise is that the cast of a very Trekkian show long since removed from TV screens are faced with a group that, though initially thought to be just more devoted fans in costume – turn out to be actual bona fide aliens. Aliens with a plea for help.

Only hours after the initial ‘contact’ at a convention for faded has-beens, the Galaxy Quest’s ‘commander’ Jason Nesmith finds himself aboard a vessel in deep space surrounded by (admittedly) nerdy looking aliens and staring down a giant angry locust type monster on a giant screen. Nesmith is not fazed, having seen (and been paid for) many such amateur operations before, though none with such painstaking devotion to detail.

Besides he’s a little lot hungover.

Then the ‘aliens’ declare themselves big fans who have never missed an episode and are positive that only Nesmith and the original Galaxy Quest crew can extract them from their predicament. “Heard it all before” thinks Nesmith… But this exact replica of the Galaxy Quest is above and beyond the skillsets of even the most hardened and basement confined OCD nerds.

Then he is given undeniable proof in the form of having his entire body ‘de’ and then ‘re-particulated’ on Earth, Nesmith reluctantly approaches the rest of his fictional crew to ask for assistance.

The crew is comprised of characters familiar to even passing Star Trek watchers, the busty lass (Sigourney Weaver), the solemn alien being (Alan Rickman), the nerdy insecure engineer (Tony Shalhoub) and the young (now older) eager rookie (Tommy Webber). Even a one off character (Sam Rockwell) that was killed off in the opening scenes of an episode stows along, which brings the only running joke that I actually cared for, that he is somehow destined to be killed off early.

The crew encounter fantastic beings (including giant rock-monsters) and amazing situations culminating in a ship to ship space-battle. There are references I got, references I knew were important that went over my head, and I’m sure a million references I missed altogether. For mine there simply wasn’t enough done to actually differentiate the cheesy tongue in cheek homage to the cheesy original show, especially when every second animated series or skit show has done it to death.

The cast are all fine I guess and stay true to the nature of their respective characters, which in itself was a big disappointment, I mean wouldn’t it have been funnier to have the solemn character a brash hothead? Or the nerdy quiet engineer a profane sex crazed maniac? I mean do you really think that away from the cape Christian Bale is a gruff voiced, bad tempered loner…?

After the initial hilarity posed by having fake characters thrown into a real life situation, the least they could do is throw some jokes my way, but that wasn’t the case. Galaxy Quest is a (probably) clever exercise for only the fanboys and fangals. I didn’t care when it was called Star Trek. I don’t get it when it’s called Galaxy Quest.

Final Rating – 6 / 10. This film wasn’t for me. If anything it only strengthened my pro-Star Wars resolve. But I couldn’t even summon the passion to hate it. I was just booooored.