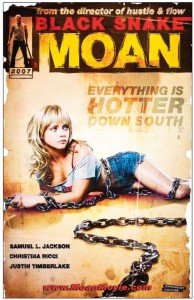 Here is a film for every crotchety single man that ever dreamed of chaining a young hot girl to the radiator in their home. Hopefully that’s a very small number of people.

Admittedly given that build up Black Snake Moan does end on what must be called a ‘best case’ scenario for one particular old guy.

Lazarus (Samuel L Jackson) has just had his wife of nearly three decades walk out on him and straight into the arms of his own little brother. Lazarus does not take this news well…

The very next morning after a mind clearing few moments bulldozing his ex’s rose garden Lazarus decides to check the mail and stumbles across a crumpled 40 kilograms of scantily clad white girl, still no doubt reeking after an unsuccessful night of trying to remain faithful to her recently departed soldier boy.

This dishevelled lass is Rae (Christina Ricci), the local ‘convenience’ who remains accessible and willing for many hours either side of 7 and 11. Thanks to a troubled upbringing that we learn far more about later, Rae gets the ‘urges’ – frequently. It seems the only thing that touches the floor more than her own feet is her shirt, that she willingly and hastily rips off several times through the film.

However Rae is initially far more subservient given her recent beating and obvious physical exhaustion, which gives Lazarus some time for thinking music. He does a little background checking and learns of her proclivities, leaving the God fearing bluesman two choices; release Rae back ‘into the wild’ where she will no doubt return to her whorish lifestyle within days, or more extreme measures.

Rae awakens to find herself (mostly) clothed for a change. This is a surprise. Another surprise arrives quickly though, when she realises that Lazarus has chained her to the radiator and is refusing to let her go. “I will cure you of your wickedness” intones Lazarus calmly.

Now Rae is used to Tough Love, but not like this.

The middle act of Black Snake Moan endeavours to make this ludicrous predicament somewhat believable and not a sensationalist work of exhibitionism, and were it not for the fact that Lazarus never thinks to provide this young lank haired waif with something to cover over her white panties, or maybe a bra or T shirt that covers some of the stuff up top, it might even succeed. Further to this is the fact that Rae tears off this flimsy shirt faster than Christina Aguilera tears through a buffet, and you have a credibility problem.

I think they say it’s a ‘brave performance’ when a young actress disrobes on film. If that is the case Christina Ricci receives several medals for heroism in this role.

Speaking of heroes, Rae’s recently departed soldier boy beau Ronnie (Justin Timberlake) isn’t one. Returning home with his tail between his legs after only days of service to find an empty trailer and no sign of his girl anywhere.

As Ronnie searches for his belover Lazarus is a’preachin’. Using speeches, sermons and almost any other hook he can find to convince Rae of the failings of her wilful lifestyle when you can see Sam Jackson straining to not just yell out ‘Bitch, Stop fuckin’!’

But everyone needs an outlet, for Lazarus it is the blues and he proves himself an adept vocalist and (pretend) musician. In one 30 second verse Christina Ricci proves just as clearly that she most certainly can not…

Black Snake Moan is a stylish and audacious effort to grab some attention in the same way that Rae uses her body to be accepted. 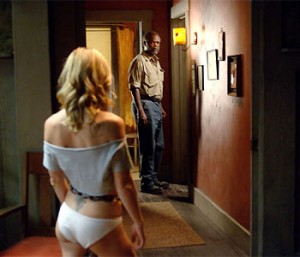 At least Rae knows that she is a bit of a ho, and she has some justification… kind of. There’s even a scene that is supposed to prove that Rae has moved beyond being an easy slut, somehow this is backed up by practically everyone in a crowded blues club pawing at her sweaty body for hours.

Black Snake Moan realised that if it convinced a young starlet to strip a few times and cast credible actors in it, that it would gain both notoriety and ‘bravery’ points. It might well have pulled it off, but in the end it doesn’t matter how they try to convince us that this is an adult drama, the fact remains;

They should really have put some pants on that girl!

Final Rating – 6.5 / 10. Black Snake Moan began life as a ‘serious character study’ where critics fell over themselves justifying the nudity as being important to the story. Now only a few years later it is exclusively the domain of salivating young guys wanting to see Wednesday Addams with her top off.

For those young men I say ‘Have at it’.