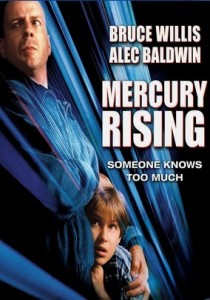 Despite this occupational limitation Jeffries is called upon to handle the aftermath of an apparent murder suicide between a husband and wife. It is at this crime scene that Jeffries first meets Simon (Miko Hughes).

Simon is an autistic 9 year old boy. Simon’s existence is ruled by repetition, routine and pattern, anything out of the ordinary causes him distress and panic, which given his inability to interact with other people is a distinct problem. But as you would expect given his love of pattern and routine, Simon loves puzzles, where other kids can only be calmed by an ipod, lollies or an Xbox controller, Simon finds escape through number puzzles.

It is when given one such book that Simon inadvertently broke a incredibly complex government funded code named ‘Mercury’, which was dubbed unbreakable and used to communicate with top secret and undercover agents the world over. The code lead Simon to calling a hotline – which is where the fund started in the first place, leading to the death of his parents and Jeffries’ involvement.

Shoulda bought the kid an Xbox…

It only takes a few hours with Simon for Jeffries to realise two things, that Simon is a handful and that he likely won’t be safe if handed to the authorities.

This second part is due to the presence of Agent Kudrow (Alec Baldwin), the man credited with introducing the unbreakable Mercury code who sees it all unfolding in front of him if this young boy and his unique skillset are made public knowledge. Kudrow swiftly decides that the penalty for breaking the Mercury code is death – even for kids who thought they were working on a complex Sudoku.

So by now we have a former undercover agent disenchanted with his employer thanks to a botched job, a young child left helpless and orphaned thanks to a botched hit, and a senior agent willing to kill thanks to a child that with the capacity to botch his multi-billion dollar code. All of this begs the question: can the US government get anything right?

What follows after this set up is your standard good guys playing keep-i-offs with bad guys, only both the good and the bad guys are ultimately on the same side.

For a guy with a 9 year old autistic boy as his top priority Jeffries sure does take his eyes off the prize a lot, leading to him rushing to prevent trains, cars and bullets from hitting the young boy. (Eventually he gives up (not really) and leaves Simon in the care of a young woman he just met named Stacey.) However the most dangerous being to both Jeffries and Simon is a nameless and emotionless killing machine who seems to be everywhere, gunning down anyone in his way that might threaten the integrity of the code and serving as an almost Terminator-ish threat to appear unannounced from nowhere at any moment to kill with ruthless efficiency.

Bruce is his ever stoic reliable self, Baldwin a smarmy arrogant git – which is kinda how I envision him in real life, and Miko Hughes does a right Haley Joel Osment in making a ‘small kid with issues’ role into something much more, and then disappearing from screens permanently… His Simon is awkward, vulnerable and innocent, capable of putting himself in harm’s way at any moment due to his unfortunate inability to exercise common sense and basic survival instincts.

I consider Mercury Rising as another example of how Bruce Willis’ presence somehow elevates the material from not-worthwhile to (just) worthwhile, this film is not much different from Hostage and 16 Blocks in that it is just as easy to watch as it is to forget. The perfect lazy weekend flick really.

Final Rating – 7 / 10. Mercury Rising is a wholly unremarkable film that somehow lodges in your memory banks, leading to occasional instructions to ‘Sip it slowly. Very hot.’ around our house, where we must have watched it four or five times now.