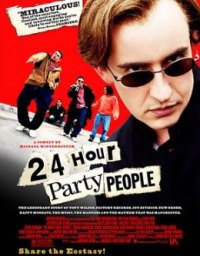 Here is a film that is far more creative and entertaining than the source material might warrant, especially given that much of the film is devoted to navel gazing morose musicians in an especially depressing area of the United Kingdom.

But the film is driven by its experimental nature and the performance of Steve Coogan as Tony Wilson, a central figure in the real life events that the film portrays, who Coogan plays with far more than a dash of his other alter-ego Alan Partridge.

In short Wilson is an ego-maniac with chronic insecurity issues and simultaneous delusions of grandeur, that probably makes him a lot or at least a little like … Partridge. Whether you love him or hate him, you can’t not watch him – at least in this film anyway.

Wilson was there at the genesis of more than a couple of landmark scenes in music, and he tells us as much in clever irreverent, 4th wall busting narration, often turning direct from a dramatised moment to tell us what ensued after the event. As the face of music changed, so did he.

* NOTE: All the rest are to be prefaced by ‘allegedly’. The film even admits it makes up a fact or two to keep the story popping.

(Allegedly) Wilson was present at the Sex Pistols first gig, then for almost every cultural breakthrough for the better part of a decade in Britain, including the formation of the Buzzcocks, Joy Division, New Order and the Happy Mondays.

Initially it was largely paranoid, claustrophobic, depressing shoegazer stuff, like emo but lacking a marketable angle, Tony was on hand to discover Joy Division, and like many others found beauty in tragedy, until the lead singer ‘removed himself’ from proceedings just as they seemed set to explode worldwide.

Here is a man that despite – or perhaps because of his confidence, bravado and the occasional stroke of luck – manages to be around at the nichiest of niche moments in musical history.

Credit where credit is due, Wilson might be an opportunist, but he had the balls to put on the line, establishing a music label that heavily favoured the artist themselves, then opening an ahead of its time club in Manchester prior to anything similar enjoying any success in such a low socio-economic area. It might again be pot luck, but the opening of the club coincided with the arrival of cheap and omnipresent party drugs including speed and ecstasy, which fuelled a generation of glow-stick rocking kids shuffling away with their eyes closed. The same kids that made the drug effected purchases that made over-rated crab-bands like The Happy Mondays short lived Kings of the scene, despite minimal talent.

Unfortunately as Wilson discovers, when the music that drives the drugged out partiers is in turn driven by musicians equally of their face, it makes for volatile, unreliable and combustible dealings on both sides of the stage.

Featuring cameos from many of the real musicians portrayed in the film’s events, and with several performances from notable British character actors – especially Andy Serkis as a pompous self-important producer – 24 Hour Party people is amusing even if you weren’t a big devotee of any of the scenes portrayed, which I am not. In fact I was continually surprised to find how much I enjoyed a film that centred on a guy that I would probably loathe in real life and his dealings with musical genres where I haven’t even a passing interest.

Final Rating – 7.5 / 10. This probably won’t be the film to convince you of the merit of British pop in the 80s and early 90s if you aren’t already a fan, but it will likely entertain you anyway.