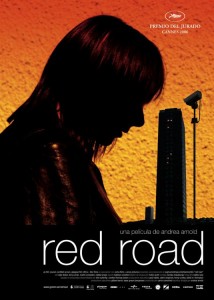 Jackie is a CCTV operator who leads a solitary, mundane life. Dinners for one, late night TV and regular lengthy shifts watching several small screens at once, monitoring them all for signs of pending crime or cause for alarm which are duly reported to the authorities for them to handle.

The only spark in her drab life is provided by the occasional tryst with a married colleague, and this too seems to lack much in the way of genuine passion.

Then one night Jackie sees a familiar face on a tiny monitor positioned near the Red Road flats, one she immediately recognises. It is Clyde.

In the days that follow Jackie continues looking for and watching Clyde. Then when that is apparently not enough, she ventures outside on foot to the Red Road district and follows him around, initially attempting to stay well away from him.

The Red Road area in Glasgow is a seedy, dilapidated area, full of low income housing, crime and an over-riding sense of despair as the locals bully, bash and rob from each other.

There is a reason that the area is monitored constantly by people like Jackie.

Clyde is a thickset redhead with a perpetual menacing look, an incredibly confident and equally direct demeanour, and a pair of the blackest emotion free eyes you will ever see. Jackie is gaunt, thin and appears exhausted. As she grows increasingly desperate I found myself saying ‘No. Don’t!’ to myself. But she keeps ‘Yes. Doing!’

By the way Red Road gives you nothing about Clyde nor why Jackie feels impelled to follow him, there are hints along the way, but these in truth are only hints after the facts, which are exposed in a matter of fact way over a bleak two hours.

Being a stubbornly Scottish film with a Scottish cast, the dialogue is full of slang and indecipherable moments delivered by actors with thick accents. In one particularly heavy dialogue scene in an otherwise silent kitchen I heard every single word uttered with clarity – and understood maybe 40% of it.

This adherence to authenticity is admirable and only adds to the impact of the film. There is a particularly graphic sex scene at one point which is entirely and emphatically not of the ‘Sharon Stone carefully backlit on silk sheets’ variety, and there is minimal music to distract you from the sadness unfurling onscreen.

Red Road is as real as it comes, a low key film about an especially realistic situation. There is zero flash and no concessions to those not paying attention.

Jackie seems sad when the film opens. She only gets sadder as it progresses. Sometimes the truth is sad. So is this film. But for the not faint of heart it is also exceptionally well realised and worth tracking down.

Final Rating – 7.5 / 10. Red Road is a fascinating exercise in progressive depression. Every twist and turn in the deliberate and languid tale makes the experience that much harder to stomach, but no less worthwhile.