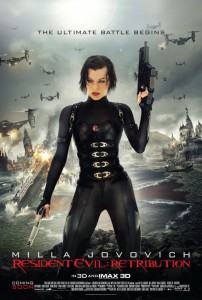 Got most of your checklist right here.

I was particularly surprised when Resident Evil: Elocution* received better than expected reviews, outstripping my predictions of 11% on rottentomatoes.com and 31% on Metacritic with 28% and a towering 39% respectively. Hell I’m about to go 0.5 beyond the upper rating I thought I might bestow it with a 5.5.

* The Suffixes mean absolutely zero and 97% end in ‘tion’.

That doesn’t mean for a second that it’s any good though. One grab that I read suggested it was ‘the best Resident Evil yet’. Two thoughts to that; 1/ not a huge claim when only one film thus far was even remotely worthwhile, 2/ ‘yet’ suggests more will come… scary.

Now with the DVD release and the associated drop in cash outlay from $20+ to $3 (on tight-arse Tuesday!), I find no reason not to watch Resident Evil: Inebriation.

Do I get my three bucks worth?

Hilariously enough the opening scene confirms most of my bold predictions made prior to the film’s cinema release, as a leather clad Alice (Milla Jovovich) covered in pointless buckles # shoots dual pistols (then sawn off shotguns) at dozens of heavily armed gunships all # proceeding towards her guns blazing – with # shells pinging onto the ground and glass periodically shattering in #.

I only wish I thought to propose some months ago that this would all unfold # backwards – you got me there Anderson!

After a 4 minute recap of the entire franchise so far – that tellingly spends the first three minutes on the original (and best by far) flick – we move into the plot proper, which kicks off with the most transparent rip-off of the Dawn of the Dead remake that you will ever see. It’s one thing to try to steal Zack Snyder’s love of chicks with guns, # action and irrelevant costumes, but an entire scene is unforgivable.

As far as I could tell the plot revolves around # 360 degree flips, # knocking things up to catch them – and Alice being stuck in a deadly simulation with piped in never-ending loud music. Or something. I was surfing the net as much as I was watching by this time.

You’d think that if the super-evil super-conglomerate Umbrella really wanted to keep their fiendish testing and research low key they’d remove the giant red logos from walls, windows and floors?

If you were to ask me the main differences between this film and the previous editions it would be that obviously awful CGI has been replaced by obviously awful wire-work, and that they brought back a bunch of characters that failed to leave an impression in earlier films.

Despite my total lack of attention I still managed to get lost as one by one characters from previous editions all popped up. Apparently this was supposed to be of incredible importance, though most of the time I couldn’t tell who was for Alice and who was against her. In truth I don’t think it mattered much…

In one scene a woman lies motionless on the snow, where a more thoughtful character attempts to warm her up by laying a warm coat on her. Think about that one motion for a second – let’s not get this person off the snow and ice, let’s let this coat do the trick. That’s tantamount to stopping a steak from cooking by blowing softly on the side not in contact with the hotplate. Is it any wonder with characters as smart as old Snow-Coat that this franchise is so very dumb?

I wrote my initial protest review in about 15 minutes flat off the top of my head without a skerrick of information about the latest film beyond the fact that it was coming.

I churned out a bunch of lazy crap that I accurately surmised the especially non-creative might settle for. I nailed 90% of it in this 15 minutes.

The end result onscreen was only marginally different than what I came up with while waiting while my coffee cooled. The film-makers took 6 months or more and spent millions. Millions that unfortunately were recouped $20 at a time from the repeatedly duped masses who deserve better.

At least they only got $3 from me this time. One day I will summon the intestinal fortitude required to walk past this crap with my wallet safely in my pocket.

All that said, Resident Evil: Insertion is indeed the ‘best’ edition since the first over a decade ago. In reality it is no better than the others, just ever so slightly less abhorrent.

Final Rating – 5.5 / 10. The many extremely similar ideas of Paul W.S. Anderson – a director of below average ability – all vomited onscreen simultaneously.

P.S. For those vaguely interested ‘#’ means slo-mo. In the end I got tired of typing it out so often.