The Lords of Salem (Review) 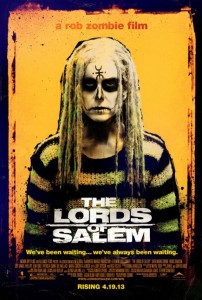 Linda the clown didn’t book many kid’s parties after the ad.

If Lords of Salem proves nothing else – and it doesn’t – it is that witches be crazy.

The film opens in Salem, and after some pervy and exploitative shots of his own missus we learn that we were just unwillingly ogling the clumsily dubbed Heidi LaRoc, a local late night member of a radio do trio catering to the alternative and experimental.

When a random record arrives unannounced at the front desk with Heidi’s name on it she takes it home and gives it a spin. While the grinding semi industrial folk stylings of the song do nothing for me and the male listening companion accompanying Heidi, they spark dark visions and feelings that leave her feeling all woozy-like. I should probably mention that the song is by a group called the Lords of Salem.

Meanwhile three strong willed and opinionated older women move into the vacant apartment in Heidi’s building – which is a surprise to the landlord who insists the apartment remains empty.

A day or two later and Heidi spins the record again in an amateur submitted section on her radio show, to the indifference of the two male djs and their ‘Salem witch lore specialist’ guest who just happened to be on hand, but to a frenzied response from the transfixed YY chromosome listener base.

Credit to Zombie for at least trying to branch out. Lords of Salem tries in vain to mimic a Kubrickian tone. It obviously harbours aspirations of becoming a real movie instead of a kitsch über-violent piece of crap that exists only for shock value, come the goat sacrifice this all swiftly evaporates.

As a director of confronting horror movies ex schlock rocker Rob Zombie has so far proven that what a great… Well he actually kinda sucked at the schlock rocking part too.

At least Lords of Salem eschews the standard ‘gee that’s unpleasant-ry’ in favour of attempting some honest to goodness mood and momentum. Once again though the end result just isn’t very good. On the plus side it is mildly less egregious.

Final Rating – 5 / 10. Congrats Mr Zombie – if that is your real name – you have made a lousy horror film instead of something you should be very embarrassed about.