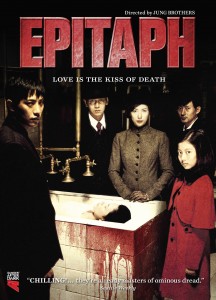 At the opening of Epitaph it is 1979. Dr Park is an elderly university lecturer who learns of an old hospital being torn down, the very same hospital that he trained and spent the early years of his career in.

The film then takes us back to 1942, Park’s formative years, and rolls out like a more thematically linked ‘Three… Extremes’ with a trio of entirely different horror tales all occurring at the hospital during Dr Park’s tenure as a man with the unenviable role of morgue assistant; prepping bodies for autopsy and the like…

The first story starts when a beautiful young suicide victim arrives at the morgue, the second when a young girl is admitted after a car accident that claims her mother and stepfather, the third when a Korean soldier who took refuge in the wrong place ends up in the morgue.

This is all very formulaic, Asian horror stuff, with long drawn out silences punctuated by long haired figures emerging suddenly from dark corners. The central theme seems to be love in its many misguided forms.

I won’t spoil anything by explaining the subplots further, besides there isn’t much more to tell. Suffice to say that you’re either scared by this stuff or you’re not.

After dozens of them over the years, many of them far more efficient than this, it takes a lot more than a lank haired pasty character saying ‘boo’ to get my pulse racing.

Final Rating – 5.5 / 10. If I had to judge though, the second tale has the best ‘boos’ and the most blood, so if I had to pick just one story I would go with that. In reality though if you miss this you aren’t missing much.