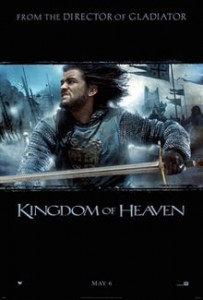 … And the star of nothing.

For a 3 plus hour film Kingdom of Heaven often feels like it is in a great rush to go somewhere slowly. I guess it’s understandable, given the alternative is a 4 or 5 hour film.

But consider this; … umm Balian (Orlando Bloom) goes from crusading with a wife at home, to arriving home to a deceased wife, to continuing life as a blacksmith, to finding his Dad and a new travelling party (by practically ensuring he is never welcomed home again) to officially orphaned and on the road alone – in about a quarter hour screen time.

That’s a whole movie in another director’s hands. To Ridley Scott it is merely the warm up to the epic that follows.

Balian is inspired to visit Jerusalem when another crusader named Godfrey (Liam Neeson) shows up to beg forgiveness. “Why” sez Balian, “Cos I porked your Mum – against her will’, sez Godfrey, who continues ‘By the way I have a job for you in Jerusalem’.

‘Ta but no!’ says the still mourning, but now even more confused Balian.

As if he didn’t have enough on his plate his religious fanatic nut of a brother gets into him about his wife’s untimely passing at her own hand. An unplanned brothercide later and Balian is calling for Daddy…

In the short bonding time that Balian gets with Pop he learns that his Dad is tough (“I once fought for two days with an arrow in my testicle”) and… not much else really, not even a playthrough of ‘Cat’s in the Cradle’. In fact halfway through his first sword lesson a group of vengeful ‘townies’ arrive to take Balian home for sentencing, with most of Godfrey’s crew killed in the battle and Godfrey himself mortally wounded.

Now Balian is flying solo with no home to return to and only a property left by a Dad he only just met in a foreign land to head towards. Undaunted he heads off to Jerusalem, where most of the action – and most of the slow periods – take place.

Balian wants only forgiveness for his dead wife from a God he feels has chosen to ignore him. So Balian determines that from here on he is unaligned, a slave of no-one and a master of none. He settles into Jerusalem and becomes a man of the people.

But this is the same guy who snagged Miranda Kerr, even laying low Balian catches the eye of the Queen (Eva Green) who is tired of her King, a Christian who wants to cement his legacy by invading others and building his reputation as a great king.

From here on in Balian is unavoidably trapped in a holy war that festers itself into being between the Christians and the Muslims. Apparently Jerusalem was like a flag in Quake, everyone wanted it but didn’t know why, and they were happy enough to kill to either get it protect it.

I actually think that director Ridley Scott’s intent all along was to illustrate the pointlessness of using religion as a justification for conflict, not to make a LotR period epic or a character study involving pretty people. Ironically though despite these noble goals the battle sequences are the best bits in it, with some especially bloody and frantic sequences leading to a well plotted finale that maps out an entire lengthy siege quite capably without dull moments or rushing through.

Thankfully though despite the bloodlust there are enough moments to appreciate that are not slaughter-specific. Scott treats all religion equal and instead examines the extreme individuals and complicated decision making processes that often lead to unnecessary killing. But while he is right not to take sides, by not doing so the film is strangely dispassionate and at times uninvolving.

The cast however is first rate, with Michael Sheen, Brendan Gleeson, Jeremy Irons and David Thewlis – who really should be in all of these films – appearing through the film. You won’t see Edward Norton in the film. But then again you will…

Instead of bias the film exists alongside both parties with no right or wrong suggested, only the countless unfortunates who fall victim as a result.

Having decided that God is no longer watching but not siding with the Muslim religion, Balian is the representation of this neutral group. He watches on as they prepare to lay waste to each other to defend Gods and beliefs that he does not adhere to with a mix of curiosity and sorrow.

Unfortunately this was my response also, in sharing Balian’s beliefs I was already a ‘believer’ in the frivolousness of religious conflict. My curiosity was piqued as to just how incredible three hours spent examining the topic could be, my sorrow was that although extremely competent, Kingdom of Heaven brought nothing new to this table.

My internal message remains “You should not win at religion”.

Final Rating – 7.5 / 10. An immense, intricate production with countless extras and sumptuous locations and design. The blood and guts flow freely in the battle sequences, however the yawns and checking of one’s watch are a little too prevalent in other sequences.