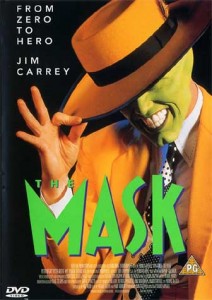 Stanley Ipkiss (Jim Carrey) finds a mask. A magic one. A mask that enables him to shake loose of his inhibitions and perform superheroesque and cartoonish feats with all the confidence that he would never ordinarily have.

Ipkiss goes from meek doormat to a green faced guilt free energetic quote machine. And didn’t the 90s know it.

I myself never got The Mask. Sure it’s funny watching Carrey chew scenery and do all the things that Ipkiss never would. But I don’t see why this is all so hilarious. At best it’s a novel throwaway film, I thought that nearly two decades ago and still think it today.

Cameron Diaz makes her debut as Tina the gangster’s trophy girl and club singer, but it is Carrey and the early era CGI that are the stars here. The Mask might have proved Diaz’s stepping stone to two decades of barely deserved celebrity (“Look, I’m a tomboy but still look OK in a bikini!”), but Carrey launched himself into the stratosphere with his inventive, audacious and juvenile Mask’d creation. Looking equally at home on the dancefloor or just mugging and babbling like a crazy person, you cannot not watch him for a second lest you miss something insane (but in reality only slightly different from the insane thing he just did). 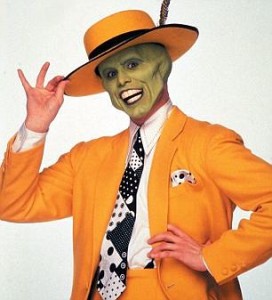 The Mask comes across as a cross between the Nutty Professor (Eddie Murphy version) and Robin Williams as Aladdin’s Genie, two other quote monsters that I felt were a little over-rated for what they actually were.

Of course being Hollywood The Mask persona starts to seep into Ipkiss’s normal life with moral-teaching results for all, strange given the central premise for most of the film was ‘who wants the nice guy when you can have a brash green faced dick’ (but then again women constantly fall for rich morons).

The Mask was easily digestible, fast moving and edgy enough for the mainstream to think this was something just dangerous enough to let them feel cool when trotting out the catchphrases at work parties and barbecues. And I count myself as a card carrying fan of Jim Carrey in the 90s, I just think that Liar, Liar and the Ace Ventura films are better.

Final Rating – 7 / 10. Hardly the comedic giant it is made out to be, The Mask nonetheless paved the way for a decade of better Jim Carrey comedies… and two decades of Cameron Diaz (for better or worse).