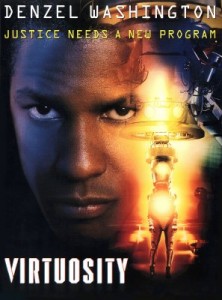 The central premise of Virtuosity is ridiculous. In the future police are trained in virtual reality situations based versus characters constructed to have the traits and characteristics of real criminals.

Actually it doesn’t sound that far fetched, maybe it’s just the way that this concept is handled that is stupid…?

Denzel Washington is one of the early guinea pigs in the VR systems as disgraced ex-cop Parker Barnes. When given the choice between remaining in the real prison where white supremacists and criminals he put away line up to take shots at him, and being released – but monitored closely – to chase an escaped VR character who has somehow become real, Barnes decides to risk freedom.

Especially once he learns that the VR character is based at least in part on the man that killed his wife and daughter, and whose murder resulted in Barnes being thrown in jail in the first place. Somehow by killing the VR representation of his family’s killer Barnes will avenge his family’s death and his imprisonment – even though he has already killed the guy, leading to his imprisonment, where he…

I have to stop there. My head hurts.

SID 6.7 (Russell Crowe) on the other hand has no such qualms or circular ethical conundrums. He is too busy enjoying his new physical form and being able to kill for realsies for the first time… real life murder is apparently even more fun than VR murder, something that should bother anyone who has kids that like Xbox first person shooters.

SID 6.7 is a combination of hundreds of serial killers and miscellaneous psychopaths, all of whom apparently just loved killin’. He has no real care or craft to his movements, more a bloodlust that frequently requires venting. As the ‘only guy that can kill SID 6.7’ for reasons never reasonably explained, Barnes sets to the task with vigor. Barnes even gets the obligatory not-love-interest in police psychiatrist Madison (Kelly Lynch) to be the Sandra to his Sly, and this Demolition Man clone comes full circle.

As Barnes Denzel is in cruise control, Lynch is instantly forgettable as his quasi sidekick.

Virtuosity is Crowe’s coming out party. Although he had already appeared in The Quick and the Dead this was his first lead role and he has a genuine presence, giving a computer program charisma and genuine menace with measured speed and precision.

Despite this bust out role though, Virtuosity cannot overcome its shortcomings of being a bad guy chased by a good guy film, and the feeling that this has all been done better.

Final Rating – 6 / 10. A pretty low-brow high-tech affair. A decent ending snagged it a 6 score… barely. Where Denzel and B movies are concerned give me Ricochet any day.