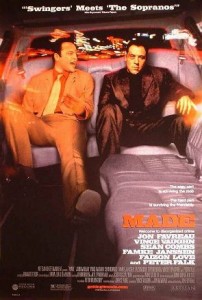 ‘Well at least it’s not Diddy…’

Ricky (Vince Vaughn) is the noose around Bobby’s (Jon Favreau) neck, a friend that he cannot ignore or fob off, but one that will inevitably and excruciatingly cause him untold agonies with his stupidity, tightening the noose one ridiculous statement at a time.

After Bobby pisses of his boss Max (Peter Falk) by defending his stripper girlfriend Jessica (Famke Janssen) with his fists, he is told that he can inch back into the good books by carrying out one big job. Bobby places one proviso on the job, that Ricky is allowed to ride shotgun, so that he can get back on the right side of the ledger also.

Everyone has a friend like Ricky, a guy who doesn’t ‘get it’ but swears black and blue that he does. Someone who thinks digging deeper will somehow extricate him from the hole that he is in, then – wide eyed and palms pointed upward – asks why no-one backed him up. Only no-one has a friend that much like this Ricky, Vaughn takes the annoying smart mouthed douche that made his career in Swingers and removes all redeeming qualities while somehow dialling up both the abrasiveness and volume. His Ricky is a powerful character for all the wrong reasons, especially as he drags the well meaning and loyal Bobby down with him.

The unspoken job takes the duo to New York city. They are each given a per diem and a pager, with instructions to lie low until the pager buzzes and provides further directives. The one over-riding tacit understanding is that sit still and DFU (the first word is ‘Don’t’. The last ‘Up’.)

Now Ricky was already a clueless arsehole prior to the trip, but once given what he feels is responsibility he kicks into self important overdrive. I was going to list the people he rubs the wrong way, but let’s just say it starts with the flight stewardess on the flight from LA to New York and doesn’t stop until after his return.

In between he and Bobby eventually meet with their NYC contact Ruiz (P Diddy) and his crew and discover the nature of the job – which I won’t divulge here – aside from the fact that it should be straightforward. But if you believe that’s the way it plays out you haven’t ready anything above.

Throughout Ricky is the over-eager puppy with the brain of a goldfish, continually ignoring advice and common sense, overstepping his bounds and constantly fucking shit up, leaving the mess for Bobby to clean up.

Like Lady GaGa Ricky has the knack of making simple things way more complex than they need to be, unlike GaGa he can’t manage to turn all of his quirks and obvious failings into a mega platinum career and millions of delusional fans…

Despite the fact that I just spent 87% of the review describing Ricky I hated the character and kept waiting for him to get real hurt – as in dead. Sure I couldn’t stop watching him and rolling my eyes at his antics, but I hate when obviously reprehensible and awful people succeed, even if only by not failing.

Despite having the core elements of Swingers and Jon Favreau taking the directorial helm for the first time of note Made would be dull without Ricky, and it is painful with him. Being torn between tedium and aggravation is no pleasant choice.

Despite P Diddy having a central role, the Made soundtrack is an unexpectedly solid one filled with great hip hop.

Final Rating – 5.5 / 10. Made might be occasionally compelling and Ricky might be a magnetic central character for all the wrongs reasons, but none of this makes it a pleasant two hours.