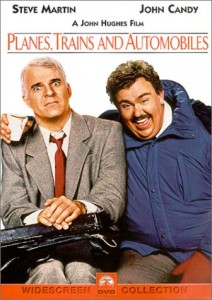 Planes, Trains and Automobiles is as under-rated as it is unassuming, and considering it is a most straightforward here to there mismatched buddy road movie you can suggest that it is extremely under-rated.

Think an old school version of Due Date, then imagine if Due Date was a comedy. And good.

But why is it better? Consider first that it is better acted than 99.7% of all other comedies. You can thank the masterful Steve Martin and the irrepressible late John Candy for that.

Secondly it doesn’t overstay its welcome and overshoot its possibilities. Sure the type of film demands constant setbacks and unfortunate coincidences, but for the most part the film stays firmly in realistic territory.

As the film opens successful hardworking executive Neil Page (Martin) is finishing up a business trip which leaves him one short plane ride away from home with which to prepare for Thanksgiving, still two days away. Neil is on a schedule, but with ample time to get there regardless of delays.

Or so you would think.

Neil meets slobby, over-friendly Del Griffith (Candy) shortly after his first minor setback, then reluctantly pairs with the jovial shower-curtain ring salesman who takes each delay and unfortunate event in stride without a care in the world.

And there are a great many such instances. Inclement weather, crime and misunderstandings all conspire to impede the duo, forcing them to re-route and use alternative – slower – means of transportation. This, couple with the obvious personality issues between uptight Neil and carefree Del, causes the tension to ramp up steadily. 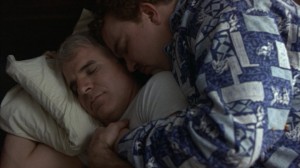 Despite this Neil keeps his inner kettle on ‘simmer’ for the most part, letting the aggravation and stress ball up in a lovely knot in his stomach and keeping his true thoughts at bay behind thinly pursed lips.

But eventually even the most measured must let loose some steam, and Page let’s his blow big time in an ’18 F-words in 60 seconds’ rant that is hilarious and unexpected. As is the retort to his rudeness.

Directed by John Hughes, Planes… moves quickly, putting the viewer in the same state of hurried confusion as Neil and Del. Despite being polar opposites in the film the pair do still share effortless chemistry, even their arguments are heartfelt. The film closes out with a surprisingly touching ending which rounds out the film nicely and ensures it ends on a high note.

Final Rating – 8 / 10. Planes, Trains and Automobiles might not be the screwball rival to Animal House nor the immaculately crafted Groundhog Day, but it boasts a couple of great moments, gives the two comedic giants in Martin and Candy room to move, and will leave more of an emotional impact than almost all other comedies of this or any other era.