Do the Right Thing (Review) 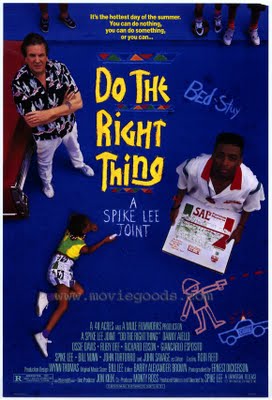 "Hey you up there! Did you order a pizza?"

Do the Right Thing is an exercise in style over substance, of adrenalin and bravado trumping plot and realism, of a message beaten into submission through sheer weight of numbers.

The opening scene is basically a music video, one that has nothing to do with the film aside from setting the tone.

That does not mean that Do the Right Thing is somehow not an important movie, far from it. It is an at times psychedelic headfuck, a mish-mash of random movement and broadly drawn caricatures of various generations, backgrounds and ethnicities.

As we are told all too many times the film takes place on an especially hot day in New York as a bright colourful array of broadly drawn characters go about their everyday business. For many that’s simply hanging on street corners commenting on passers by, for the homeless man known as the Mayor (Ossie Davis) that means cadging enough cash to buy a beer, for various shop keepers that means running a business where the clientele openly resent them – or at least their background.

Most notably this includes Sal’s pizzeria where the aforementioned Sal (Danny Aiello), his two sons Vito (Richard Edson) and Pino (John Turturro), and delivery boy Mookie (Spike Lee). (As something to do with nothing our family dog is named Mookie, though not for this film, for ex-Atlanta Hawks PG Mookie Blaylock.)

As the day progresses and the temperature soars the normally barely convivial relationships between neighbours and acquaintances fray, with tempers simmering in the heat.

It seems that people of every ethnicity have issues with those of other races and religions, and that on this particular day hiding these resentments and opinions is not high on the priorities list.

In the middle of all this is Sal’s, a pizzeria in a predominantly black community with a black clientele that proudly hangs numerous pictures of Italian-Americans on its walls. Son Pino openly resents both his situation and customers, Mookie wants to hold onto his job but is constantly having his patience tested by Pino’s poking and prodding, and Sal is proud of his business and standing in the community, and seems to genuinely not see things as being defined by colour or race. 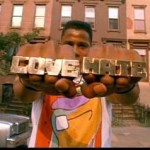 There are a lot of subplots and peripheral characters in Do the Right Thing who serve little other purpose but to show the extent of the melting pot, to keep the blood pumping and the film moving at 100 mph, eventually though many of these characters converge on Sal’s at almost the same time, and the tense interactions and stress of the day all come to a head.

I won’t betray the ending of the film here, especially given that it is really the only major plot development in a film which up to that point was all build up putting several characters on an inevitable collision course.

The film is exceptionally edited to remain in perpetual motion, a blur of vivid colour, profane dialogue and loud conversations and rants peppered with casual (and sometimes inferred) racism.

Danny Aiello and John Turturro both have very brave performances, and I say that realising that ‘brave’ is a descriptor used all too frequently in film, but here it couldn’t be more apt.

Equally brave and amazing is the writing and directing job done by Knick fan #1, Mr Spike Lee, here still a scrawny chicken legged kid, and realistically one who some twenty years later has still not topped this film.

I wonder if two decades on Spike/Mookie would make the same decisions and take the same actions if faced with a similar situation he did in 1989. Actually my main hope is that the casual racism and resentment has somewhat abated from the levels shown in this film, and far more clumsy lesser films such as Crash.

And if you have to have one song played about 237 times in a film, I’m just glad it was Public Enemy’s ‘Fight the Power’, and not a million other crappy songs.

Final Rating – 8.5 / 10. Do the Right Thing might not be the most subtle film to deal with the topic, unfortunately it might be the most honest.