Wrath of the Titans (Review) 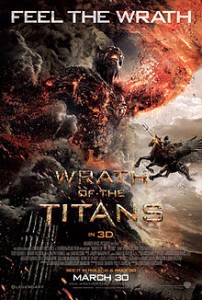 It’s been a mere three years since Avatar introduced Sam Worthington to us. Formerly there was little chance of anyone but his Mum picking him out of a lineup of boy band members and sit-com actors.

Since then it seems he is everywhere, despite being the youngest member of the ‘I don’t act as anyone but myself’ group, whose luminaries include Samuel L Jackson, Denzel Washington, Adam Sandler and Russell Brand.

Sam doesn’t do accents… well. He doesn’t seem to even attempt to bring nuance or new traits to each role, where possible letting the CGI do the work for him.

So it is perhaps divine intervention that Sam has been teamed with the Titans series of films, as they are perfect for each other. Despite being a period piece set in mythological Greece only a smattering of actors even bother with accents, characterisation is at a minimum, and for most it seems wearing sandles and a fake bushy beard ‘does the job’, and of course when all else fails look up and pretend a big scary beastie is there, because in the film it will be.

In Clash of the Titans Perseus (Worthington), born of human and God, laid the smack down on the Kraken, a huge beastie that threatened humanity. That was it really, it wasn’t much to write home about.

In the time that elapsed between crackin’ the Kraken and the opening of this film we learn Perseus opted not to take a seat with the other Gods and instead elected to remain human, raising a young son in a small village.

So when Papa Zeuss (Liam Neeson) pops in to forewarn Perseus that demons are on the way and asks for help in stemming the invasion Perseus tells the old man ‘no thanks’.

He is for all intents and purposes retired from the game. Do we think he can maintain that non-militant stance? Let’s read on shall we?

Without Perseus alongside the Gods – who all take their grooming and fashion cues from Gandalf –  last about 18 seconds in a ‘battle’ so toothless that they should all lose their titles. Without the ‘Artists formerly known as Gods’ to hold them at bay all the demons of Hades ascend to Earth to wreak havoc upon the mortals including Perseus’s village.

You would have thought he might have considered that possibility…

So Perseus, born of God and Man (Wo-man more accurately), reluctantly teams up with another ½ and ½, Agenor – Neptune’s kid – AKA the Navigator  and the hottie Queen Andromeda to trek the arduous journey to Hades to overthrow the new tyrannical rulers and free the defeated Gods before they lose their immortality and therefore become vulnerable.

They inevitably take on various beasties along the journey – did you know Cyclops travel and fight in family groups? – though they didn’t answer the eternal questions; is a Minotaur made out of hamburgers? And, why are all the Gods named after warships?

The journey is indeed long and painful – mainly for the audience – but once they arrive at Tartarus, the labyrinthine lair of the demons, holding place for the defeated Gods and the leading cause of tooth decay, things perk up a little. But like Clash, Wrath suffers by existing the same cinematic universe as the Lord of the Rings trilogy and dozens of other pretenders that have been released over the years.

The CGI is better this time around but can’t hide the fact that the threadbare plot is almost the same as the first film, despite a reasonable cast (Bill Nighy appears as Hephaestus, regrettable both for the brevity of the role and the fact he is named after a venereal disease) and a few decent moments Wrath can’t pick which side of serious or irreverent that it truly belongs and instead hedges into both.

Final Rating – 6.3 /10.  My first ever 6.3 score, given as I think it is ever so slightly better than the first film, but hasn’t got enough ‘good bits’ to qualify for the ‘almost good’ 6.5. Before LotR this would have been the duck’s nuts, now it is just another noisy wannabe to be consumed and forgotten in the same evening.