B Movie Haiku Reviews: The Video Game adaptations. DOA / In the name of the King / Tekken

Bit bored with shlock lately, felt like checking out some all new schlock populated with characters from video games.

Wow is there an echo in here? Well as I was saying video game adaptations are a lucky dip at best, any Resident Evil sequel at worst. 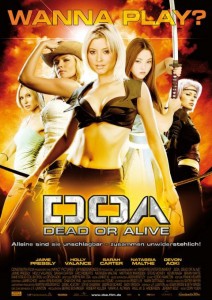 Well folks we have a new contender up for analysis, a film that is a standard one on one fighting game, only with a claim to fame of featuring several scantily clad nubile young women of various ethnicities, with the added benefit of having the option to increase both bust size and jiggliness of same. (I’m serious, I had the game in the 90s, it amused me for an entire minute one day.)

Final Rating – 5 / 10. For those who think that I am simplifying because of the three hot chicks on the DVD cover let me simply point out that imdb has this among the few items of ‘Trivia’ relating to this flick: “According to Holly Valance, about 40 bikinis were ruined while making this film”. 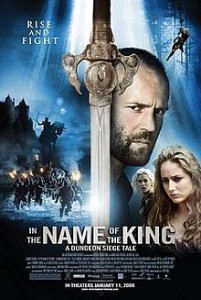 In the name of the King: A Dungeon Siege Tale

Uwe Boll. The two syllables that raise the hackles of millions of bespectacled cinema buffs worldwide – myself included – though why he is derided for ‘destroying’ the memory of such source material as this and other video games I can’t fathom. After all video game combos are hardly that successful even if he is not involved, please scroll up or down for more evidence…

Anyway this one is based on a Lord of the Rings video game. Wait it isn’t? Well strike me, it sure seemed like it is from watching all butt-numbing 2+ hours of it!

Offed his kid, took the mis-sus

Whilst out-doors with no T-V

Dear Uwe, if you put Matthew Liddiard and Burt Reynolds in a non-Austin Powers film you immediately rule yourself out of Oscar contention. Actually even base credibility.

When you then have Jason Statham and Ron Perlman who steadfastly won’t act, Claire Forlani, Liddiard and Reynolds who can’t, and Ray Liotta who just didn’t bother here, that leaves Brian White as the only man who can hold his SAG card high after this dross.

That’s right, I said Brian White. And you can be damn sure I had to imdb his name.

Final Rating – 4.5 / 10. I’ve seen worse than this Lord of the Rings wannabe, but that ain’t a compliment, and for a two hour film there really isn’t much to it. 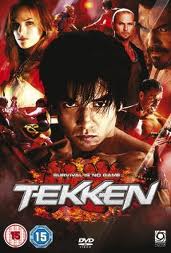 Tekken reminds me of the Lego games available on Xbox 360 where you play out a famous movie, say Indiana Jones or Star Wars, only the environment is entirely built by (animated) Lego, and indeed your primary characters are the Lego versions of themselves.

While Tekken isn’t made of Lego, it is essentially the exact same young dude who enters a fighting tournament facing insurmountable odds flick that we’ve seen a million times (Kickboxer, The Quest, Karate Kid), only in a world populated by Tekken characters.

In short, it is everything you expect – as long as you have low expectations.

A young kid hopes to es-cape

There are a dozen movies based upon video games released each year. Usually you only hear about the ones that nabbed a minor star in a lead role or those based upon a popular game.

Final Rating – 5 / 10. Tekken is a popular game, but when you desperately want to Fast Forward the fights in a movie that is all about fighting. That’s bad right?

To summarise; Video Games = great to play / suck to watch.

Until next month…
OGR

While I try to throw a joke or two into proceedings when I can all of the opinions presented in my reviews are genuine. I don't expect that all will agree with my thoughts at all times nor would it be any fun if you did, so don't be shy in telling me where you think I went wrong... and hopefully if you think I got it right for once. Don't be shy, half the fun is in the conversation after the movie.
View all posts by OGR →
This entry was posted in B Movie Haiku Reviews, Crappy Movies, Film, Jason Statham, Movie Reviews, Superstars. Bookmark the permalink.