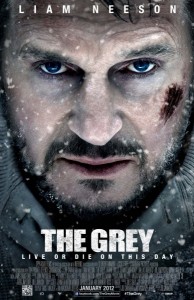 Liam Neeson has all of your manliness.

I want him looking for me if I am ever Taken.

I want him guiding me through danger, and if I don’t make it I won’t blame him. I’d even want him there as I drifted away.

I even want his rough accented brogue as the voice on my sat-nav.

Ottway (Neeson) doesn’t care. He doesn’t care about much at all really, in fact at the opening of the film he seems about ready to give it all away.

Then only hours later when the 30 odd seater that he is a passenger in goes down in a crash sequence and aftermath that may forever put you off smaller planes, Ottway might have been forgiven for wishing he pulled the trigger…

But Ottway is All-Man first, and a formerly suicidal pessimist second. He instantly assumes the lead in ensuring that the few remaining survivors escape the desolate and intimidating surrounds of the crash site. It turns out that on the job Ottway was a ‘pest pacifier’, he killed wild animals that came too close to the operation, but out here he has no boom-boom and no cover.

What he does have is smarts. His every comment is to be taken as gospel, his every muttering instantly useful. Strangely enough though the rag-tag bunch of slackers and initially don’t take nicely to being ordered about.

Then the wolves show up. Big, savage, drooling and territorial – like a pack of Khloe Kardashians – they brazenly show up to defend their turf, picking off the weak and isolated and tearing them a new… well everything.

If the plane crash made you averse to flying, the second hour of The Grey will most definitely make you a cat person.

The Grey is not your typical ‘man against nature’ film, wolves or not. While it might boast familiar elements to many such films the director ensures that you can never get too comfortable or start predicting what comes next. It is true that on occasion an impassioned speech or quiet moment is cut short by a many-fanged beastie these moments are switched up to the point of almost randomness. No sooner do you think one thing will happen when the opposite occurs. This is a little hard to get used to but nonetheless refreshing.

The hard part is that in a film like this the usual ‘Hollywood’ rules of closure don’t always apply.

Neeson looms large over the remainder of his pack of survivors, who despite some admirable attempts at characterisation still came off as ‘the other guys’. The presence of Neeson makes it a slightly better film than it really is, but with or without him this is a film worth watching.

I sincerely doubt that many women will walk away from this happy though. It’s heavy going. There are some films that are undeniably ‘Great’, but weeks later have vanished from your conciousness, The Grey is different, in reality it is nothing more than a decent flick, but thanks to an adherence to tone and a few memorable scenes I think this is a film that will stay with you for a while…

Final Rating – 7 / 10. An alternative to formula. Like the harsh surrounds in the film The Grey is difficult and inaccessible, but nonetheless it is worth checking out.