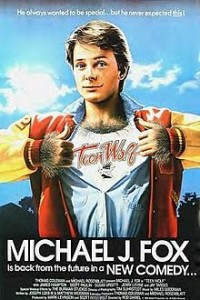 Teen Wolf was just another 80s movie that I didn’t catch at the time and have never bothered chasing up since.

Until now. And boy do I regret it.

Let me just say that the memory of some films is better than the reality. Well I never had a memory of Teen Wolf, and the assumed images in my head revolved around the hairy dunking guy from the clips and previews.

In retrospect those crappy images were actually way better than the dismal finished product.

Apparently the Beavers are in a perpetual dry spell, with team members ranging from useless to fat and useless, and a coach best described as taking the ‘a’ from ‘apathetic’.

Might I also say that while Mr Fox’s first initials might be MJ that is indeed where any similarities to a real basketball player end.

Typical set up right? New coach comes in and inspires the former losers to greatness…

Wrong. This isn’t your typical ‘underdog sports team beats the odds film’, it also isn’t a ‘boy cries wolf’ flick. It is in fact a boy is wolf flick.

Young Scott starts noticing that his body is going through changes, he has hair where there was none before – all over his back, forehead and paws for example. He also has the two fangs typical of young high school students.

Yes for those living permanently in the cheap seats it seems that Scott was born into a werewolf family, that or he was unknowingly inducted into ZZ Top. His father calmly informs him that this is quite normal – for them anyway – and that his new form brings new abilities and powers. 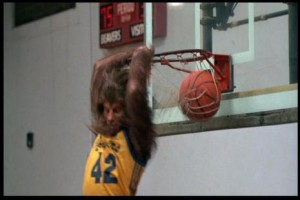 Indeed Scott is stronger, faster and better co-ordinated than ever before, skills and abilities that he puts to use on the basketball court where he rapidly becomes a sensation in the town, with the team embarking on a sudden winning streak thanks to their hairy, dunking dribbling machine…

Wolf-Scott is instantly popular and adept at everything, including dealing with non-understanding adults and the ladeezzz. Unfortunately this newfound popularity leads to Scott getting all Kanye West and feeling that it’s all about him. The hot chicks, the cool friends and the respect are all forthcoming, but will he remember the little people?

All this and of course The Beavers are suddenly the hottest ticket in town thanks to the hair-oics of Wolfie, can he possibly learn his lesson before the Big Championship Game?

Aaaaaahhhh who cares? I actually think that set up might sound like a fair, albeit cheesy, 80s comedy. There is no fair here folks, only cheese. The ‘wolf-ball’ scenes are confined to the one short montage almost everyone has already seen and the rest of the film is similarly cheesy, horribly dated and quite frequently embarrassing.

Teen Wolf is basically a one note star vehicle for Michael J Fox on the heels of Back to the Future. Perhaps the most fanciful element has Fox as a hairy beast, I’m positive that the man still doesn’t shave. It is sadly lacking in jokes and memorable moments aside from the basic premise. (If you’ve seen it ask yourself if you recall anything that doesn’t involve dunking)

I mentioned to TOG that I’d checked out Teen Wolf for the first time and regretted it. His reaction was ‘Yeh but Michael J Fox was in it. I like Michael J Fox’.

So do I, which is why I feel so sorry for him right now.

Final Rating – 5 / 10. Exhibit A as to why people refer to Michael J. Fox as Marty McFly, Alex P. Keaton and the Spin City guy – in that order – before they mention Teen Wolf.

P.S. I know I can’t bag a nearly 30 year old film for its horribly dated music, but the only place selling the Teen Wolf Soundtrack is the JB Hi-Fi on the 7th level of Hell. It’s right next to the Kardashian DVDS… 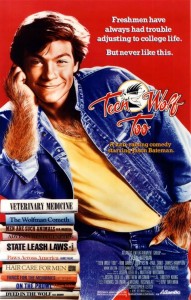 Seeing as I am an open sceptic as to the genuine entertainment value of Teen Wolf in any more than kitsch value, I should have already adopted the brace position as the opening credits of the even blander sequel started.

When the ‘big callbacks’ are that Scott’s Dad is back for a few minutes, Stiles is now an entirely different person and the fat guy from Scott’s basketball team is once again on the scene how could they possibly go wrong?

So cousin Todd (Jason Bateman) is heading to college. He already knows he is a werewolf, but that doesn’t stop Uncle Howard busting out the makeup and wig early for no reason, unless he wanted to prove early that the makeup budget was smaller this time around.

Stiles is Todd’s roommate, and not only is he Stiles 2.0, he is unbelievably ‘barely keeping the closet door shut’ gay in this film, from the constant innuendo laced chatter to the frankly creepy comments that should have Todd asking for another room.

The indoor tanning in front of a ‘Men Working’ sign is simply the Vaseline on the cake.

Anyway back to the plot which is quite environmentally conscious, having been straight up recycled from the original film. This time around the wolf isn’t an unlikely basketballer with no skills, he’s an unlikely wrestler with the uncanny ability to make his eyes glow. Awesome.

This time around Todd embraces his furry fame early – regrettably – leading to an ‘impromptu’ song and dance number where performs both disciplines terribly, especially upsetting seeing as he mimes the whole thing.

Unbelievably enough the filmmakers seem to have felt  that the first wasn’t broken – maybe they didn’t actually watch it? – so they make no attempt to fix it.

And boy does this need fixing. Despite somewhat of a career rebirth as a comedic ‘force’ in recent years the fact is that Jason Bateman has 45% of the charisma and likability that made Michael J. Fox a diminutive Hollywood staple for a couple of decades. Another more troubling fact is that even though he was around 5 foot 3 with his Air Jordans on Fox is still a far more likely NBA prospect than Bateman is a wrestling threat, and the scenes where we are expected to swallow this possibility are pure torture.

Final Rating – 4 / 10. I didn’t think it possible, but by taking the only thing that made Teen Wolf remotely bearable (Fox) and expecting a facsimile of the rest to pull the wool over the eyes of the audience, Teen Wolf 2 manages to be nothing more than a dog in wolf’s clothing.

While I try to throw a joke or two into proceedings when I can all of the opinions presented in my reviews are genuine. I don't expect that all will agree with my thoughts at all times nor would it be any fun if you did, so don't be shy in telling me where you think I went wrong... and hopefully if you think I got it right for once. Don't be shy, half the fun is in the conversation after the movie.
View all posts by OGR →
This entry was posted in Film, Movie Marathons, Movie Reviews. Bookmark the permalink.