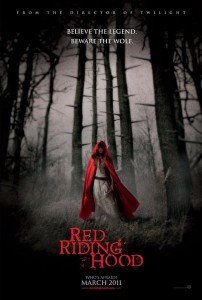 Red Riding Hood is boring. It perhaps shouldn’t be, but it is. It wants to be part love story, part action flick, part whodunit. But it isn’t much of anything but a bland teen-targeting borefest trying to elbow into Twilight’s audience.

Long ago. A remote European village filled with brooding beautiful and/or handsome citizens is under siege from a werewolf. Each month at the full moon the village goes into lockdown, with no-one emerging until daylight. Yet still some locals manage to turn up dead.

The latest is Valerie’s (Amanda Seyfried) sister. It is obviously a very sad day for the village and particularly the family, with Valerie’s alcoholic Dad and super-serious Mum both extremely upset.

Valerie loves Peter, a local woodcutter who seems decidedly swoony. She is unfortunately arranged to be wed to Henry, who isn’t a woodcutter but is almost as dreamy. And he’s rich.

After the latest fatalities an outside expert is brought in to rid the town of the furry evil, a man who chose to kill his own wife when he found she turned into a snarling, vicious monster every month or so (I’ll leave the obvious and unsavoury joke alone).

The new wolf-hunter is Solomon (Gary Oldman), he is brash, loud and confident, perhaps because he is backed by several heavily armed men, perhaps because he swiftly realises that everyone else in this crappy film is too busy brooding and looking mysterious to show a pulse.

Solomon summons the entire village to inform one and all that not only do they have a werewolf, but he is a resident of this very village *GASP*…and soon a ‘blood moon’ will come, meaning the wolf can infect others and make more werewolves.

So we’re left with two questions:

1/ Will Valerie break with formality and choose beefcake over rich-boy? And;

The answer to both is that only teen-girls could give a fuck. I tuned out early, then had to hold back vomit when I learned that the dodgy as hell looking werewolf could communicate with Valerie via telepathy or something.

As mentioned only Gary Oldman seems to realise just how bad this all is, and his over-acting replicates that of Anthony Hopkins in Dracula – in fact his character is basically the Van Helsing role here in this patently obvious rip-off. Everyone else shuffles about like
emo-zombies with flawless skin, backed with tasteful lighting and teen friendly angst music.

I could write this off as being ‘not for me’, but I sincerely hope that utter garbage like this isn’t possibly right for anyone…

Final Rating – 4.5 / 10. A film aimed at a Twilight crowd that is so awful in every respect that I would rather rewatch Twilight than this.