The Adventures of Pluto Nash (Review) 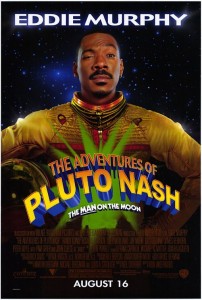 They knew name recognition was the only thing going for it...

The Adventures of Pluto Nash isn’t the worst film ever made. It just might be the worst value for money though, with a reported budget topping 100M and a box-office of less than 5 it makes Jonah Hex look like a wise investment.

But despite this it is more sad than bad.

Pluto Nash was made by the same guy that made Tremors which is the inverse if Pluto Nash, a low budget / high entertainment affair that is remembered fondly by all that have seen it. Pluto Nash wants to be quirky, cool, edgy, funky and hip but is really none of these things.

It is 2080 and the Moon has been made hospitable for humans. Pluto Nash (Eddie Murphy) is the guy who everyone on Earth’s satellite adores – except the bad guys who want to force him to sell his bumpin’ club to them.

After a run in leaves his club a smouldering pile of rubble (like this film) Nash sets off with waitress Dana (Rosario Dawson – who obviously spent her paycheck on implants after filming ended) and his faithful robot Bruno (Randy Quaid).

The trio traverse the moon trying to lay low out of the gunsights of the bad guys while working towards finding who is ultimately responsible for their situation. Along the way they encounter many recognisable faces that add nothing to the film, Jay Mohr, Peter Boyle, Pam Grier, John Cleese and Alec Baldwin among others. 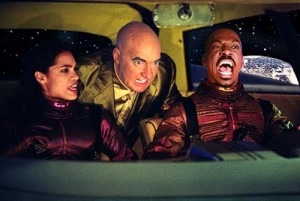 I think the aim was for Nash to be cool and likable, Dana the cute love interest and Bruno the comic relief.

As does everything else in the film.

But again Pluto Nash is as harmless as it is pointless, unlike the braincell shattering Tank Girl it made me want to sleep more than vomit – admittedly neither is an endorsement for the film – but the issue remains how could something cost so much look so ordinary?

Now I know how the Miami Heat must feel.

A big budget light comedy set on the moon and featuring its own fading star in Murphy was never going to be a big hit. This can’t be the fault of director Ron Underwood but the big-wigs who greenlit it and opened the coffers. The absolute ceiling for this film was Demolition Man, itself decidedly average. The floor was Tank Girl, which Pluto managed to avoid but just barely.

Now you tell me; is a ONE HUNDRED MILLION DOLLAR investment worth making for a film that at best could end up mediocre?

Final Rating – 3.5 / 10. Pluto Nash sucks, but it is isn’t the end of the world… unless you happened to be the one who covered the budget.

While I try to throw a joke or two into proceedings when I can all of the opinions presented in my reviews are genuine. I don't expect that all will agree with my thoughts at all times nor would it be any fun if you did, so don't be shy in telling me where you think I went wrong... and hopefully if you think I got it right for once. Don't be shy, half the fun is in the conversation after the movie.
View all posts by OGR →
This entry was posted in Crappy Movies, Eddie Murphy, Film, Movie Reviews, The 7th Level of Suck. Bookmark the permalink.