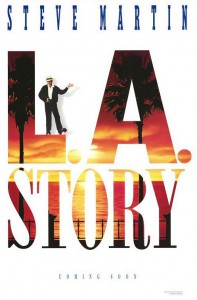 Steve Martin’s paean to his home city is complicated, bizarre, earnest and ridiculous. It is really a series of skits surrounding a few scenes from a romantic movie. Some of the skits are amusing, some dated and some fall flat, but at all times it is clear that while LA is far from perfect Steve Martin has embraced everything about it.

Martin is Harris K Telemacher, a “wacky TV weatherman” who pre-tapes his segments days in advance as “it’s always sunny in LA”.

Harris hangs out with a similarly fake crowd of so-called friends and acquaintances, going to fake places where your income and status are badges of honour – and in the case of one restaurant determine whether you are even able to get a reservation.

Over a busy couple of days Harris meets two women, a British journalist named Sarah who is honest, charming and genuine, and SanDeE (her spelling not mine) who is fake, superficial… and willing to bonk him.

When Harris finds out that his current bitch of a girlfriend is cheating on him he must make a choice – did I mention one of the women is willing to bonk him??? Guess who he ends up with.

A young Sarah Jessica Parker plays SanDeE is ditzy, vibrant and energetic, it might… no “IS” the only role I have ever seen her in where she was even vaguely likable, and thanks to some bike pants momentarily hot… That might be L.A. Story’s main achievement right there, they should market it:

Anyway Harris and Sarah keep bumping into each other and their mutual attraction grows, Harris is told by an automated freeway sign that his life will be changed soon (you heard me) and from there the film almost follows a more standard rom-com formula to the conclusion.

Richard E. Grant plays Sarah’s ex-husband in a far more low key manner than his scenery chewing turn in Hudson Hawk, in between the skits and sightgags Martin proves once again that he can act, I’ve already mentioned SJP’s moment in the sun and there are too many minor cameos and bit parts played by famous people to count.

L.A. Story is part love letter, part hate mail to Los Angeles, it covers fashionable lateness, casual crime and shows just how uncaring and unthinking the average citizen of the city can be, but to contrast it seems to suggest that LA has an element of mystery and magic, and that anything can happen there.

Like most of Steve Martin’s movies I want to like this film more than I actually do, ultimately though this proves an unfocused vanity project, an at times hilarious but mostly just amusing jab at Steve’s adopted hometown.

Final Rating – 7.5 / 10. The few inspired moments more than cover up for the flat spots and missed jokes, and of course Steve Martin makes anything slightly better just because of his presence.