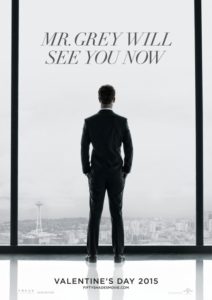 They couldn’t be more alike.

She is Anastasia (but you can call her Anna), a mousy insecure university student with a sensible cardigan and budget haircut. She can’t finish a sentence without becoming flustered.

He is Christian Grey (but you can call him Grey), an arrogant confident mid twenties billionaire surrounded by luxury and beauty. He doesn’t see the need to begin a sentence.

He has others for that.

But she disarms him. Something about her ill-prepared half-arsedness. Her lack of social skills. (She asks if he is gay.) Her total absence of savvy and the inability to think on her feet. (She doesn’t think to follow up on his bizarre “I enjoy various physical pursuits” statement.) Even her sheer ineptitude can’t sway him. (She leaves her list of questions behind.)

Then, when she drunk dials him just before vomiting on herself, he tells her that he has been watching her. Researching her. Analysing her.

It was love at first stalk.

Four awkward and decidedly stilted conversations and one strange non-disagreement, later, Grey opens up about the breathtakingly reprehensible nature of his desires. An onlooker might describe it like this.

Him: I am selfish, creepy, depraved. It’s lucky I am a good looking billionaire so I can get away with being a serial predator.
Her: He is soooo rich.

If I am not mistaken, this is a film with the central plot device is a ‘mistreatment contract’, a document that is entirely one sided in favour of Grey, while imposing all kinds of restrictions upon Anna despite her being at the… um ‘pointy end’ of most of the activities. Activities designed to permit Grey to indulge his socially frowned upon desires.

Make Christian Grey a forty something office manager earning 80k and this is not a modern day alt-romance, it’s a slasher film.

But wait, middle aged E Channel disciples, what of the sex? Oh there is sex. Sex indeed. So much sex. Sexy times for all.

So the sex. (Not that I’m interested in that kind of thing, but) despite the constant talk about the topic and the incredible array of tools ‘n’ toys at Grey’s disposal, the sex is quite vanilla. There is quite literally a sequence where sexually charged threats turn into being tickled with a feather.

Which is this film. All clumsily written dialogue masquerading as salacious high art. This is the person who buys a candle for $9 and feels they are being exotic. This is the teenager who takes his date to Sizzler and thinks he is being ‘pimp’. This is the woman who breathlessly tells her BFF of her wonderfully romantic experience, when the reality is she got drunkenly banged in the KFC toilets at 2 am.

This is dangerous in the way that a second beer at Friday lunch is dangerous. When really it’s just ill advised.

The acting is unmemorable. The cast poorly chosen to pander to an audience craving easy acceptance; the plot would be more effective with a considerably older Grey (think Clive Owen or even Kevin Bacon) but they settled for handsome charisma-free abs instead.

And the music throughout – no doubt selected for the soundtrack sales potential – is terrible and often entirely inappropriate for the scene.

So in summary; two reasonably attractive young people with nothing in common find reason to get it on. Ooooooohhhh, risqué.

The reality is that Fifty Shades of Grey is about as titillating as the word ‘titillating’.

And for those who have seen the film and want a counter-point to think about, here is my ‘spoiler filled’ summary of what the film is really about.

While I try to throw a joke or two into proceedings when I can all of the opinions presented in my reviews are genuine. I don't expect that all will agree with my thoughts at all times nor would it be any fun if you did, so don't be shy in telling me where you think I went wrong... and hopefully if you think I got it right for once. Don't be shy, half the fun is in the conversation after the movie.
View all posts by OGR →
This entry was posted in Crappy Movies, Film, Movie Reviews, Special Requests. Bookmark the permalink.