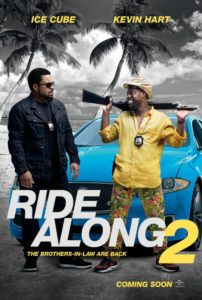 So a year or so ago I wrote this about the original Ride Along:

“I was totally ready to dismiss Ride Along and move on with my life. Then a funny thing happened; not only did I not hate this film, I kinda liked it.

The premise doesn’t help explain my enjoyment. Ben (Kevin Hart) the college security guard who thinks that videogames are his life, wants to impress his girlfriend and her surly brother by being accepted into the police training program.

James (Ice Cube) is the surly brother. Already a seasoned Atlanta cop, James wants no part of yappy and annoying Ben, and he wants Ben to have no part of his sister. He decides to call Ben’s bluff, organising a ‘ride along’, where Ben will accompany him for a day’s police work. The twist being that James plans to engineer it so that this particular day will paint an awful portrait of what being a member of the Atlanta PD actually entails.

Kevin Hart is running this ‘over confidence until confidence is required’ thing into the ground – just as Pauly Shore ran the adorable gibberish stoner thing and Rob Schneider the fish out of water klutz before him. His mix of bluster and bluff works in interviews and small parts, but expecting it to be rolled out in film after film is patently foolish. I am already at the stage where I hear his every line as “yap yap yap… Scream“, and I can’t be the only one. The menacing quizzical expression sported by Ice Cube in the face of his nonsense must have been some of the easiest acting of Ice’s career, which to be fair hasn’t really involved much ‘acting’ since Boyz ‘N the Hood.

The centrepiece of the film, in which Ben must do Grown Cop work, is especially excruciating, highlighting his every deficiency for alleged comic effect. Fortunately for the film though, there are enough other funny bits to make the film momentarily distracting in a positive way.

If, like Ben, you just give in to the silliness and settle in for the ‘ride along’, there are jokes to be had. The fact that many are at the expense of Ben is expected, but still satisfying. This leads me to believe that Hart’s career will go for as long as we can still derive pleasure from his suffering.

EDIT: Ride Along shouldn’t expect to be considered alongside Lethal Weapon or even Rush Hour as an action comedy, but it is OK’

Back to the Present: I present; Ride Along 2

So now it seems they did it again. Rather than rewrite all of the above please feel free to replace ‘Atlanta’ with ‘Trip to Miami’ and realise that in this one Olivia Munn plays a streetwise Miami cop and Kevin Hart wears some ridiculous outfits.

The rest is exactly the fucking same, only slightly less so. All flash, no function.