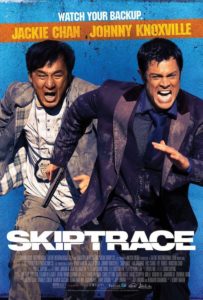 In trying to recapture the homogenised buddy flick magic of the Rush Hour and Shanghai Noon films, at least Skiptrace… serves to remind us how good those films were by comparison.

Bennie (Jackie Chan) is a Hong Kong cop chasing an underworld crime lord called the Matador – which if you ask me is a shitty crime boss name.

Bennie learns that the Matador plots to kill his niece, so he stashes the niece and heads across the globe to find the only man who can provide the true identity of the Matador, so he can nab him and save the niece.

At least I’m pretty sure that’s how it went.

Unfortunately the One Guy is Connor Watts (Johnny Knoxville), a sleazy con man always one step ahead of trouble but only ever another step away from more trouble, and one second away from uttering yet another painful joke.

Pause for breath. What follows is a road movie akin to Around the World in 80 Days, only with an attempt to recapture the Shanghai Noon chemistry. Unfortunately Knoxville has none of the effortless and likeable idiocy of Owen Wilson, and Jackie Chan at 60 doesn’t have the athleticism of Jackie Chan in his mid 40s. In this film the roles are somewhat reversed; it is Knoxville who takes the … Knocks, and Chan who fumbles through the occasional zinger.

So… almost every joke falls flat on the ground, and the fights, while well choreographed and still incredibly inventive, fall under the genre of ‘touch karate’. There are none of the astonishing stunts or incredible falls from the classic days, nor the full contact fighting that made the sequences such a rush.

It also doesn’t help that the editing is so crazy that it seems to have been cut by a blind woodsman; ahhhh beautiful Russia *SmashCut* wait how did we get to Mongolia? – and yet the film is still nearly two hours, and they still can’t tell me what ‘Skiptrace’ is meant to mean.

The film’s greatest strength is that it doesn’t make you hate the fact that Jackie Chan still makes movies. And as I’ve said before it it causes one young man to seek out Chan’s back catalog from the 80s and 90s… it still probably isn’t worth it.

Hopefully all of the young’uns in the audience seek it out anyway.

Final Rating – 6.3/10. You needn’t skip Skiptrace, but that said it will still likely vanish quick without a trace.