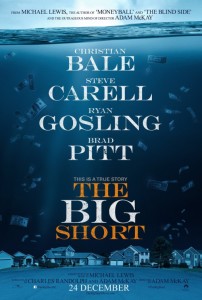 Despite every second economist proclaiming to one and all that they say the Global Financial Crisis (GFC) coming as 2008 neared, the reality is that almost all of them are full of shit.

Where The Wolf of Wall Street sought to glamorise the world of scumbag traders and the often shonky financial services industry in which they operate, The Big Short takes a dryer, more analytical view, but presents it in such an entertaining way that you will likely learn about something you previously never thought about despite yourself. And have a good time doing it.

The Big Short gives us the perspective from three separate potential whistleblowers, all of whom justify their seemingly outlandish claims with facts and stats, before being summarily and loudly ignored.

Michael Burry (Christian Bale) is the eccentric maths genius whose hunch leads to painstaking research and a theory that few will back. Mark Baum (Steve Carell) leads a team that initially deny the theory, but research it to the point that they too cannot ignore the possibility, striking a deal with brash and bold investor Jared Verrett (Tyan Gosling)

Each take their own path to what they come to view as the truth. Each reacts differently, some attempt to convince others of the impending disaster to no avail, but all seek to profit from it.

Again the film takes this potentially dry material and juices it up. The characters break the fourth wall, occasionally telling us about the truth behind certain events. There are (initially) bizarre cutaways where random celebrities explain financial concepts of situations direct to camera before vanishing as abruptly. Further distractions exist with pop culture cutaways, irreverent references and strange factoids.

It’s a cheeky film that refuses to conform to expectations. It pokes fun at the powerful  industry that produces nothing tangible but effects so many. It takes no prisoners and coddles no one, and when the film proper is complete dare sell us how practically no one was punished for a scandal that had global markets on their knees.

As someone who works in the financial industry I understand that no one really wants to bother looking in to the events and actions that preceded the GFC. It’s just easier to blame the ‘pricks in suits’. If The Big Short does nothing else but use humour to teach a few people to second guess what they are told, then it has done a service. If that doesn’t happen, then it’s at least an extremely entertaining film.

Final Rating – 8.5 / 10. The incredible financial cost of the GFC is no laughing matter. The Big Short is.