In a World… (Review) 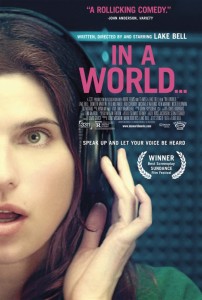 “In A World… where there is apparently a demand for voiceover professionals to speak over movie trailers, Carole (Lake Bell) finds herself surrounded by men.

Men like Sam, the man with the most boomingest of voices. The man on every marketer’s speed dial. An undisputed giant in the industry. *Pause for Effect* And Carole’s Father.

Men like Gustav. The heir apparent. The man waiting for Sam’s imminent retirement.

Men like Louis, the diminutive and waifish nervous producer who would tell Carole oh so many things, if only he wasn’t so very nervous about telling Carole so many things.

If only this film weren’t as complicated as it is.”

As a film In A World is effective, interesting and charming. If anything it proves you can make a movie about almost anything. It eventually stumbles – somewhat inevitably – when all of the talk goes nowhere. As with all trailers, there is only so much yap and preamble before you just want the damn movie to start.

And this one suffers just a little by having too many characters all pulling the threads of the plot in different directions, and too many ‘look over here’ cameos to prove just how connected Lake Bell (she is writer, director and star) is.

*Back to Deep Voice Mode* “In A World where a movie exists about the people on the periphery of the movie business, you need to do more to stand out that have charming awkwardness and a smooth voice.”

Final Rating – 6.5 / 10. An indie movie with a lot going for it on the surface, but not much depth. Unlike the cool Trailer-Voice guys in the film.