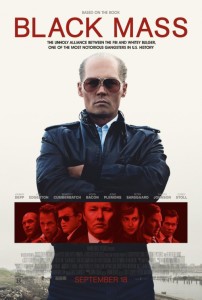 Why do we rush to stories about criminals? Why do people have pictures of Scarface on their walls? Ned Kelly?

Whitey Bulger (Johnny Depp) killed dozens and ordered hundreds of other crimes, many of them violent. He was a scumbag. A vile human being who kept the law abiding in south Boston living in fear for two decades from the mid 70s into the 90s.

Bulger was a dog who would do whatever it took to keep the crime world to himself. He killed witnesses, intimidated peaceful citizens and slaughtered his rivals, and he made damn sure people were well aware of it. Even while everyone knew they were powerless to put a stop to it, as Bulger paid off some cops and shared facts with others, both ways. He sold out his rivals and occasionally henchmen the for info to keep him out of trouble.

As a film Black Mass moves across Bulger’s era smoothly but without inspiration. He starts already a minor kingpin, then escalates his effort level with the tragic death of his young son.

Subtlety is not Bulger’s thing. Ditto this film. Both find merit in being direct and eschewing nuance. Both lay it on thick in every respect and let no one wonder what side they stand on.

Johnny Depp channels a Boston raised Hunter S Thompson to play the curmudgeonly and unpredictable Bulger, Joel Edgergton fares a bit better as a cop who plays both sides and must come to the realisation that he is running out of moves. Benedict Cumberbatch, Kevin Bacon and Peter Sarsgaad round out an excellent cast that aren’t given enough to do.

Ultimately I can appreciate the filmmaking and quality of acting, but for mine this is a low inspiration telling of an uninspiring man unworthy of the attention.