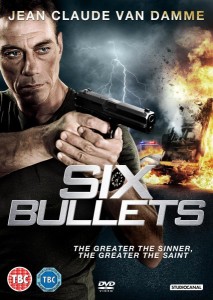 Jean-Claude Van Damme saw Keanu Reeves, Denzel and Liam Neeson find box office success and thought “I’ve been doing that for years”. He then went and sought to prove it by effectively remaking Taken.

A dastardly European human trafficking organisation specialising in young kids, mainly girls, for sale all over the world. Young Americans are especially coveted.

This is not news to Samson (JCVD). Now a butcher by trade, he was once a finder of missing kids, but ended his career after one rescue lead to many young deaths. Deaths that haunt his waking sober hours. So he reduces the sober hours, which seems a dangerous choice given the rampant alcoholism and occupation which requires sharp implements…

Samson second guesses his change of heart when approached by an American couple who have had their teenaged daughter stolen. He is an MMA fighter. She is an equally tough woman with her own abilities. It is she who gives us this gem;

“The recovery rate for kidnapped kids after 36 hours drops to 46%. THATS LESS THAN HALF!!”

Faced with such undeniable logic Samson feels like he has no choice but to take the case. Time to get our Le Taken on…

At 55 plus JCVD is too old to be busting out the splits every fifteen seconds, and the high kicks and roundhouses are things of the past also. In their place are a grizzled demeanour, violent tendencies and overly intricate traps and tortures, all designed to further the investigation and all seemingly far more convoluted than they might need be.

Eventually Mr and Mrs MMA get to play rough as well, and the finale ensures that the film ends with neither disappointment nor elation.

Final Rating – 6 / 10. 6 Bullets is a pretty good film for modern Van Damme, but it is still unoriginal and unremarkable in every way.