Battle of the 90s Submarine Movies: The Hunt for Red October vs Crimson Tide

It’s hard to believe that both of these films were made over twenty years ago. But they were, with Crimson Tide (1995) being legally able to drink this year, and The Hunt for Red October (1990) now a quarter century old.

The issue – at least for me – is that with two films about rogue submarines of unknown intent, it is quite easy to confuse them. So rather than wonder which one I would watch, I watched them both back to back, with the goal of dubbing the ‘winner’ as the best 90s Submarine Based Thriller That Your Parents Would Probably Sit Down And Watch If It Happened To Be On TV Tonight…

… Or y’know, SBTTYPWPSDAWIIHTBOTVT for short. 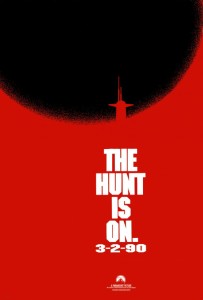 The Hunt for Red October

The short onscreen preamble is pure clickbait. It alludes to the fact that ‘what follows may or may not be true’ but comes across as “here’s what the Washington Fat-Cats didn’t want anyone to know”.

When the Red October, a Russian submarine under the control of a man whose true allegiance is unknown – and his ‘Russian’ accent near non-existent – steers his tin can chock full of nuclear missiles straight at the United States, those on both sides of the Bering Strait watch on with equal shares of terror and awe. Is the revered and respected Ramius (Sean Connery) determined to start world war three, or is he defecting to the good guys?

And that’s basically the entire plot, but of course being all Hollywood and stuff,they blow the film out to two plus hours and ratchet up the tension as best they can.

The problem with submarines is that they tend to be beneath the surface of the water most of the time. This makes it hard to wage hand to hand combat, and the inevitable torpedo battle are essentially all or nothing affairs. You get hit, game over pretty much.

So as Ramius and his crew, most oblivious to the true nature of the mission, forge ahead, most of the action initially takes place in boardrooms and in front of flashing blips tracking the vessel.

Jack Ryan (Alec Baldwin) is here, being an expert on all things Ramius, he surmises various things. Eventually the powers that be suggest he put his money where his mouth is, and he spends the second half of the movie aboard the Scott Glenn commanded USS Dallas, which has the good fortune (or misfortune) of being directly in the Red October’s trajectory.

Anyone with half a brain *raises hand* ‘hey I have half a brain’ can see where this is headed from the get go. There isn’t too much money to be made in a film that ends with the devastation of the continental United States. But as with Crimson Tide, the film manages the uncertainty as best it can, with the nerves pulled taut frequently as the worst case scenario threatens again and again down to the wire.

Connery is dignified, noble and powerful, even without a skerrick of a Russian accent. Sam Neill is ok as his second in command, and Alec Baldwin takes his turn as the revered Jack Ryan and handles it with aplomb. There is little about The Hunt for Red October which isn’t handled professionally and adeptly, but it just isn’t quite as zippy and dramatic as Crimson Tide.

Final Rating – 7 / 10. If you only see one nuclear submarine movie today, maybe let’s look at the other one… 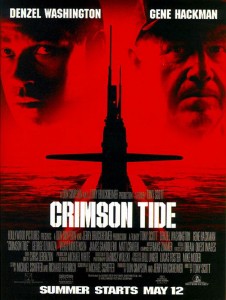 Stop me if you’ve heard this before… A Russian is waving to the U.S. with its nuclear arms, and no one is certain of their true intent or destructive capabilities. A submarine named Alabama is tasked with getting nearby ‘just in case’, then, just when things heat up…

This film is even harder to sell than The Hunt for Red October. I mean there isn’t even another submarine nemesis to go head to head with, and with the bad guys on Russian soil, the Alabama can only engage by shooting things from afar. There’s a reason why Battleship the board game hasn’t been made into a movie.

…what’s that? It has! Well I’m sure it was classy and well presented.

No the conflict here is mental and predominantly between the Alabama’s commander and his second in command.

Ramsey (Gene Hackman) is the long serving boss and everyone knows it. Furthermore everyone loves him. He’s brought them back through tight scrapes time after time. Ramsey is headstrong, charismatic and confident. He demands loyalty and respect and gets it.

The new man on the ship is Hunter (Denzel Washington). He is well educated and principled but untested in the heat. Hunter obeys the chain of command and the letter of the law, but when a situation arises for which there is no set routine, decisions must be made on the fly.

The natural claustrophobic environment of a submarine is well utilised, as is the rising pressure of the dilemma. When Ramsey and Hunter share a quiet moment to exchange belief systems, it is the calm before the storm, and the film never lets up from there.

Crimson Tide is one of those films where the drama is generated through a series of unlikely coincidences and occurrences. The quality of the cast renders these scenarios plausible, and the pressure abroad the Alabama is palpable. You wouldn’t think that a film about processes, pecking orders and decision trees would be that riveting, but yet again director Tony Scott works his cheesy magic and uses the environment to his advantage.

The pace is fast, the tension crackles and the stakes never higher. Crimson Tide might not have the gravitas or dignity of The Hunt for Red October – it probably isn’t even as memorable – but it magnifies the conflict by bringing it ‘in house’ and Tony Scott takes it from there.

Both have surprisingly deep casts and make the most of the limited possibilities that having all action take place in a tin can imposes. Both are worth your time, and yes, both would probably be left ‘on’ if your parents happen upon them on Sunday night telly.

But Tony Scott has a way. If he were a chef he’d make a regular old dish and add one unique thing that would give it a point of difference. And he probably would prefer to call himself a ‘cook’ anyway.

Tony adds the zip and shrinks the already small location so that the pressure builds and the sweat beads are more visible. Tony has both sides in the same room from the beginning.

Tony and his Crimson Tide win the day.

While I try to throw a joke or two into proceedings when I can all of the opinions presented in my reviews are genuine. I don't expect that all will agree with my thoughts at all times nor would it be any fun if you did, so don't be shy in telling me where you think I went wrong... and hopefully if you think I got it right for once. Don't be shy, half the fun is in the conversation after the movie.
View all posts by OGR →
This entry was posted in Denzel, Film, Movie Reviews, Superstars, Worthwhile Movies. Bookmark the permalink.

1 Response to Battle of the 90s Submarine Movies: The Hunt for Red October vs Crimson Tide