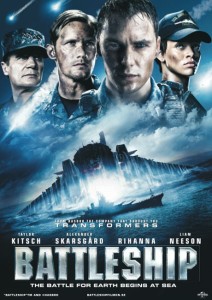 Ordinarily there would be a less than zero chance of me watching a film like Battleship. However a few weeks ago at work a kindly gent took the time to sketch out the film’s plot. He missed my wry grin and obvious scepticism, finishing his rant by suggesting I watch the film.

Unfortunately thanks to my mantra if not saying “NO!” to a recommendation, here we are…

The moment the drunk loser douche risked a second taser shot to the arse so that he might thrust a soggy microwaved chicken burrito into the hot blonde’s hands I knew it was going to be a long two hours… Actually the second I rented a film named Battleship I knew I was being silly.

But for an hour or so after that the film was just regular awful, a standard modern day ‘blockbuster’ revolving around computer generated effects and mindless noise.

The United States and Japanese navies are engaging in war games in the Pacific Ocean when the aliens land. In the ensuing hour we have all the proof we need that the US defense budget is being wasted, as these ‘highly trained’ guys and gals stumble about slack-jawed and clueless as to what to do next. By the way this doesn’t happen just once, it happens EVERY time something unexpected occurs – which in a film involving aliens is quite a bit. This film does as much for the navy’s rep as it does for films based upon kid’s board games.

Then abruptly the formerly drunk loser – no longer drunk – Hopper (Taylor Kitsch) is promoted by default being in charge of the last remaining destroyer left within the alien force field. (I should have mentioned there was a force field but it doesn’t matter one bit.) Another surprise given he was told that very morning he was to be kicked out of the navy the next day, which begs the question how did he rise so far in the first place?

With only one ship able to prevent the three alien advance craft from giving the ‘charge’ order to their home planet, Hopper and his rag tag bunch of faceless gits – one of whom is Rihanna – must find a way to save the world. On a nearby island Brooklyn Decker, owner of the second biggest pair of boobs in the film (after Kitsch and Rihanna), a guy with no legs and a cowardly scientist must rise above being the intro to a bad joke and stop the alien communications crew, while elsewhere Liam Neeson captains the entire navy and wonders just how good his career is really going…

Taylor Kitsch proves that his wooden turn that helped kill John Carter was no fluke, and Rihanna proves once again that she should stick to album covers. And I can’t remember anyone else bar Brooklyn’s upper Deck-ers.

With forgetting this dross never an issue, the question was whether I was willing to forgive, and I nearly was. Even with the obliviousness, the unpreparedness and the inaction in the face of the Master Chief from Halo looking enemy, Battleship was tracking along like any other unremarkable piece of crap toward a wholly not-respectable 5/10 score.

THEN I WAS EXPECTED TO BELIEVE that a battleship skiddie and a minor bump from a jeep would combine to save Earth. It’s one thing to bluff our dopey meme loving teens into thinking this mess is somehow entertainment, another entirely to short change them with that kind of bullshit masquerading as a crescendo.