The Hobbit: The Battle of the Five Armies (Review) 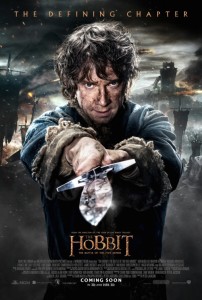 This assumes you have at least a basic familiarity with the events thus far. If not, try HERE and HERE. Or read the books. I’m not here to run your life.

The Hobbit: Battle of the Five Armies opens with the sequence that should have capped off the second film, that being the culmination of the dragon Smaug’s assault on the lake village. The scene goes for eight or ten minutes – an eyeblink to Peter Jackson – and would have ended the ‘Desolation’ chapter – still the best in the trilogy anyway – perfectly.

In any case once Smaug is dispatched and his mountain lair up for grabs, the film turns into the Battle for Smaugy’s Gold, as everyone decides that somehow the vast wealth previously coveted by the scaly beast is theirs and theirs alone.

Human, dwarf, elf and of course orc (two kinds!) are all on the same page for a change. That page being ‘gimme, gimme’…

Which brings us to the problem with this film, at two and a half hours to work through essentially two main scenes – one of which should have been attached to the previous film – there is simply too much padding. A ninety minute film consisting of a single battle sequence might have been dubbed insufficient, but that harkens back to the initial question “how can a relatively short book be spread across a trilogy of films?”

And by the way a decent TV show can catch up the movements of an entire cast in about 3 minutes while a song plays in the background. The moral? Peter Jackson will never work in TV.

They do the same thing in the pre-battle, then the battle, then the post battle, then the goodbyes for those still standing. It’s exhausting and frankly a little tiresome at times. I’ve said before that a 4 hour version of this trilogy would still tell the same story but in a more succinct and compelling way. (Maybe that will be one of the 137 inevitable blu-ray releases that flood the market by mid 2015?)

While it doesn’t do much to save time each group is represented by a couple familiar mouthpieces, with Bilbo (Martin Freeman) and Gandalf the intermediaries, at turns placating and prodding the more reluctant and/or agitated characters. Elsewhere there seem to be several new familiar animals in Middle Earth – though generally of a different size to expectations. Rabbits, goats and bears. Oh my! (I did like the concept of a giant eagle dropping bears into enemies.

The sweeping helicopter shots are here highlighting various beings running across the wilds of New Zealand, the top down zooms through vast fabricated architectures, the intricate and expansive villages, and of course the huge and well co-ordinated armies, which the LotR trilogy pioneered on film – and every second film since has sought to copy.

The Hobbit: Battle of the Five Armies is a solid film with some of the PG violence and mayhem that we have come to love, but there just seems to be more of it than is necessary. Not everyone needs a hero moment. Not everyone needs there chance to shine for four or five minutes. Not every member of the orchestra needs a solo.

What I did notice more than previously, is the slightly janky CGI effects. Billy Connolly pops up in a pivotal role, and (perhaps it was due to his recent illness) he appeared to be entirely computer generated, and somewhat shoddily so. At other times the sheer number of fast moving characters started impacting what video gamers call the ‘framerate’, meaning a slight blurring at the edges, creating indistinct images.

These are minor quibbles, but noticeable. Maybe the filmmakers grew as impatient for this to end as we the audience did. What is undeniable is that my enjoyment and anticipation at each Lord of the Rings edition far outweighed the almost obligation I felt to these films. As with the LotR the second film in the Hobbit trilogy was the strongest, as it was not constrained with either establishing the characters nor saying goodbye to them.

But after fifteen odd years it IS finally time for goodbyes, and while I loved most of my time in Middle Earth, it just seems right for this to be behind us.

Final Rating – 7.5 / 10. The biggest saga of the millennium is done. Now New Zealand can go back to being New Zealand.