The Hobbit: The Desolation of Smaug (Review) 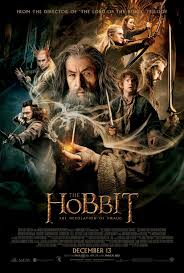 While The Lord of the Rings trilogy set the bar very high, at its core it was essentially the tale of a bunch of very different travelling companions embarking upon a long and arduous journey beset by many perils, in order to drop off a small item. In expanding The Hobbit book into three long films, Peter Jackson is attempting to pad out a similar running length from significantly less source material, with the core of this one ultimately about picking up a similarly small item.

In the LotR it was a ring. In The Hobbit it is a glowing white stone. These small furry guys like their shiny things.

As such the plot of H2: The Desolation of Smaug plays out with all the mystery of a typical Dora the Exporer episode, in which the diminutive Mexican girl and the small well shod monkey that enthral your tots stand in front of a map and spell out what will distract them over the next twenty minutes.

*big kid friendly voice* “Say it with me; we go through the enchanted forest! past the Elf Kingdom, down the busy river, over the lake, and into the Dragon’s Mountain!” (Then Boots the Monkey excitedly repeats “DRAGON’S MOUNTAIN! DRAGON’S MOUNTAIN!”)

But this is hardly the kid’s stuff of Dora or much of An Unexpected Journey. The road to Smaug isn’t paved with singalongs by those who wouldn’t be out of place at a Spinal Tap reunion. Not at all; and this second edition is all the better for it. Here there are Were-bears, giant spiders, a selfish group of Fabio-chiselled elves, and of course orcs; the nazi / zombies of Middle Earth. Put simply, where Nazis, zombies and orcs are concerned, anything goes. You can impale, eviscerate, behead and gouge away and no-one bats an eye or sheds a tear. And there is quite a deal of Orc mistreatment on display here.

With Gandalf the Grey (Ian McKellan) waylaid for much of the journey on his own side-quest, much of the heavy lifting is performed by Thorin Oakenshield (Richard Armitage), heir to the embattled dwarf throne, and his merry grumpy hirsute companions. And of course Bilbo Baggins (Martin Freeman), everyone’s second favourite small statured, pale faced, thief (after Winona Ryder).

Together they tick off all of Dora’s checkpoints one by one, aided and/or delayed by a variety of the fascinating creatures of Middle Earth; elves Tauriel (Evangeline Lilly) and Legolas (Orlando Bloom), Bard the ferryman and the Master of (run down and impoverished) Laketown (Stephen Fry), all with the vicious (and slightly sloppily computer generated) orcs in hot pursuit. 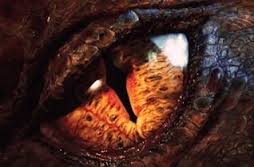 Of course much of this leg of the journey is filler. The preamble to the eagerly awaited chat with the covetous dragon Smaug (voiced by Benedict Cumberbatch – a Tolkein name if there ever was one), a chat which goes on a beat too long for mine. Perhaps they were pretty happy with their huge scaly creation, but I like my dragons to spit fire, not lengthy one sided conversations. (Say what you like about Donkey from Shrek’s wife, she knows when to keep quiet.) In fact you could almost say that Smaug was less ‘dragon’ than ‘draggin’ proceedings out…

*raises hand for high five that will never come*

With the yakking over everyone’s thoughts move to the big Alien 3 type finale – which was quite satisfying – before Peter Jackson strangely forced us all to wait twelve full months before he dots his final ‘i’ in the most pointless and obvious cliffhanger in cinematic history. An extra thirty seconds with the blindingly obvious conclusion would have been far more satisfying. What is it with PJ and endings? In Return of the King there were half a dozen, here he didn’t give us any.

I said to TOG that they might as well open H3 with a subtitle ‘so let’s just assume that thing already happened and move on’.

But that’s a minor gripe in what I found to be a welcome return to form. Sure much of the trek is (profitable) filler, but there are a couple of delicious scenes worthy of LotR folklore; the early giant spider battle was creepy and crawly, and the dragon action – once he closed his yap – effective too. The centrepiece of course is a long barrel ride down a rapid moving river, in which the ‘dwarfs plus one’ navigate not only treacherous waters, but the ever present orcs and the ‘on the fence’ elves. Mere words can’t do this scene justice, just know that it is not the theme park ride replica that it is made to sound like. It is much better and far more fun.

Twelve months ago I granted The Hobbit: Episode One (all right ‘An Unexpected Journey) a quite generous 7.5. The truer indication of the film’s impact was that I wasn’t that enthused by the imminent arrival of Part 2. That’s changed. Assuming they close off the loose end quick smart and get on with whatever the core of Part 3 is, we shouldn’t see an outcome similar to the Star Wars prequel trilogy. Based upon this effort, I can only foresee good things for the conclusion of the (lesser) LotR trilogy.

Final Rating – 8.5 / 10. A fantasy film that had me leaving the cinema with a big guilt free smile. That’s pretty great in my opinion.

P.S. In the recent Best of 2013 I suggested that Peter Jackson do the opposite of his Extended Editions of the LotR series, and condense these three films into one, retaining the necessary and rewarding. Sure the final film might be three plus hours long, but I’d rather one mega-cool flick than three middling ones. Get on it Peter!