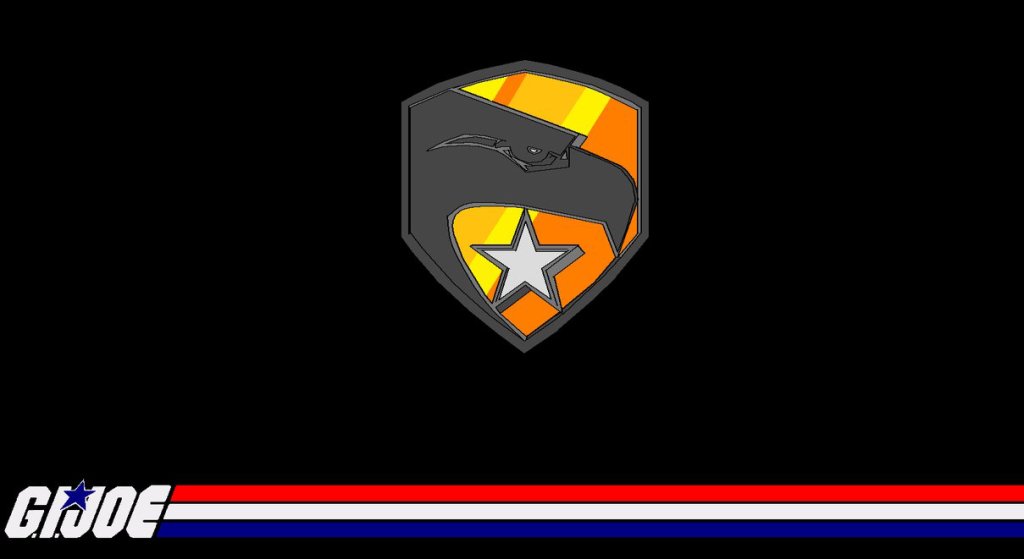 GI Joe is a film based upon a plastic child’s toy so simple it doesn’t have a surname, multi-syllables or genitalia. Despite this the film versions somehow manage to complicate the source material to the point that the plot is practically impossible to follow or pretend to care about. 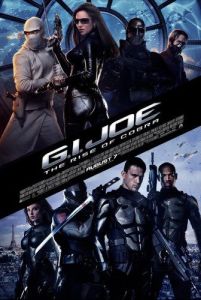 G.I. Joe: The Rise of Cobra

GI Joe should be about a bunch of well-muscled guys blowing shit up Michael Bay style, not worrying about back-stories and establishing allegiances. Enlisted men shouldn’t worry about such things, they only need a direction to look at and something to shoot.

Alas this is far more convoluted than all that, but I’ll try to dilute it down to the essence;

GI Joe are the good guys, a top secret unit of crack soldiers kept on call for emergency situations. The catalyst for these emergencies is usually Cobra, a group of bad guys who want to take over the world or something.

This time around Cobra have developed a new weapon that ‘eats’ its targets, courtesy of microscopic metal dissolving thingoes. You know, because blowing shit up is so 80s.

The ‘Joes’ are lead by General Abernathy (Dennis Quaid), although usually from one of those control centres filled with people looking down at monitors. The onfield ‘leaders’ include guys like Duke (Tatum O’Neal) and Ripcord (Marlon Wayans). Hollywood wonder why no-one took this toy spin-off seriously…

GI Joe features a higher body count than IQ count, but it is blood n guts free and mostly harmless, unless you count boredom and confusion as threats. The CGI assistance is decent, but the situations that these brave morons find themselves in are ridiculous.

There were guys in costumes who looked like other guys in costumes and I couldn’t work out which side they were actually on. Admittedly my brain-cell defense mechanisms took charge and I nodded off many times in the second half of the film.

GI Joe comes off like a conversation between a pair of two year olds; it’s animated and energetic, cute to watch, makes no sense whatsoever, and after a few minutes invariably ends in tears.

Final Rating – 5 / 10. Board game and toy adaptations are really starting to give video game adaptations a good name… 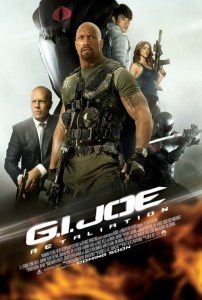 If you loved Marlon Wayans in the first Joe I have bad news, both in terms of this film and your mental health in general. If you loved Channing Tatum don’t worry he’s back, but maybe don’t get too attached…

With Cobra imprisoned (they were the bad guys?) it’s all smooth sailing for the Joes. Duke chillaxes with his big buddy Roadblock (The Rock) and his family, while the other members mill about hoping no casting directors recognise them.

Then in a whirlwind of ridiculousness new bad guys replace the President of the United States with an evil stand in, release the Cobra Kia, and eradicate the Joe team and frame them for a crime that… they did not commit…

But they made a fatal mistake by not finishing the job properly. With no-one to turn to and no-one to trust, the remaining few Joes walk back to civilisation and seek out the one guy who is beyond reproach, who couldn’t possibly be an imposter, the Original Joe (Bruce Willis).

Once again the franchise reintroduces all the parties and creates genuine confusion. There are bad ninjas and as best I could gather good ninjas too. One of them seemed to change sides which was infuriating. WHEN I WORK OUT WHO YOU ARE AND WHAT YOU DO DON’T CHANGE!

Despite the 137 characters the ‘action’ continually reverts back to the same half dozen fighting the same half dozen, with none of them ever dying. Instead they pause to have deep and meaningful conversations about nothing to do with the plot, as if to prove even people based upon plastic figures have feelings.

The only scene even warranting a passing glance takes place on a mountain side infested with abseiling ninjas, which is just ridiculous enough to be ridiculously entertaining.

But that doesn’t mean that there isn’t ridiculousness elsewhere.

The Whitehouse seems ridiculously easy to infiltrate and sieze control of, the world’s leaders all ridiculously wander around with suitcases full of nuke codes, and someone keeps making the ridiculous decision to hire The RZA despite his atrocious brand of ‘50 Cent on helium’ acting (which would prove even more egregious in The Protector 2).

It should be easier to hate this film with all of this stupidity, confusion and repetition.

I think The Rock deserves better (surely there is an 80s script left that Arnie never got to?), I wish Bruce Willis had the self respect to do more than cash that cheque. I wish someone threw the undoubtedly huge budget that this dross was granted at a director with vision and talent. But all that said all I could summon was pity, for the kids who love it, for the actors who will soon regret it, for me for watching so many films in the last five years that this is what I am left with.

Final Rating – 5.5 / 10. GI Joe 2 is not worthy of your hate, in reality it’s not worth anything at all really, which kind of shows just how little everyone involved tried.

GI Joe is such a generic property that any script about a bunch of soldiers could easily be adapted into a GI Joe adventure. But that hasn’t stopped Hollywood from ballsing it up on back to back occasions with lamentably convoluted and boneheaded scripts which could very well have been written by people with cylindrical plastic heads full of nothing more than stale air.

There are two ways to go with this; a Christopher Nolan style realistic route (bad idea) or the other way, make it a parody of itself with larger than life characters, silly in jokes and over the top bad guys.

The only thing I know is that there is no future in maintaining the current route, half arsed sorta kinda half trying and doing just enough to get by.

Or Option 3; give up and leave it the fuck alone. When you degrade the good name of a child’s plastic toy, you’ve made bad many decisions.