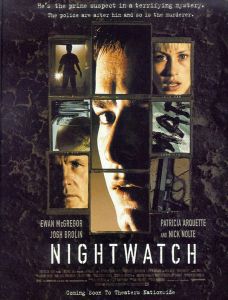 Martin Bells (Ewan McGregor) is a law student by day, and a morgue security guard by night.

And at night the morgue is a freaky and creepy place indeed. When the lights go out the shadows come alive, the coat in the corner looks at you funny, and every creak or bump is surely the dead rising to devour the flesh of the living…? Or not.

Shortly after Martin starts his tenure at the facility a dead hooker arrives on a gurney, then another within days. The death of a prostitute is unfortunately not a huge surprise, that a pretty direct line seems to insinuate that Martin may be intimately involved slightly moreso.

The facility’s doctor on call (Brad Dourif) looks at Martin through sceptical and creepy eyebrows, girlfriend Kathryn (Patricia Arquette) wonders just how intimately Martin knew the hooker in the first place, best friend and risk-taking yahoo James (Josh Brolin) thinks it’s all hilarious and not at all serious, and the lead Detective on the case (Nick Nolte) grills Martin to try to get him to crack.

Martin knows that he is innocent. And we the viewer know because we’ve been hanging around with him. So there is only one way that this can pan out; the killer will be revealed, and we’ll be impressed or not.

You will not be astounded or amazed.

Night Watch wastes a solid first fifteen minutes – the handover scene between Martin and the retiring guard is a trip. But all momentum is killed quickly by an abhorrent sub-plot surrounding James’ willingness to debase others for his own amusement, and several unlikely and messy developments that such films deem necessary to confuse and mislead viewers prior to the Big Reveal.

And the Big Reveal is lazy and disappointing. Sooooooo…

Final Rating – 5.5 / 10. When your whodunit thriller is lacking in thrills, and you care about neither what was ‘dun’ or who might have ‘dunit’, then there isn’t much left.