For some strange reason we have had a glut of films featuring mischievous body parts with their own agendas – or at least body related parts. 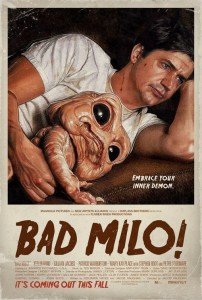 So it seems Milo is an angry personal angel/demon of vengeance that emerges periodically to punish those that annoy or threaten its host. And he lives in the host’s arse.

How couldn’t that be a wall to wall chuckle fest?

With a butt rel-a-ted plot

But(t) you’d hope for more than this

Ken Marino does his Ray Romano after a car accident thing and tries to remain above the material. Peter Stormare revels in low-brow as the kooky psychiatrist asked to analyse the contents of Duncan’s pants. But neither are given much to work with. Even the outtakes are boring as hell.

In fact the only thing I can think of as memorable is the ‘entry – and re-entry’ scenes.

A film with a premise as ridiculous as this owes it to us to be more ridiculous. For a movie about butt-demons this sure plays it safe.

Final Rating – 5.5 / 10. Ironically it is the film that most looks like it was pulled out of a stressed out guy’s butt. 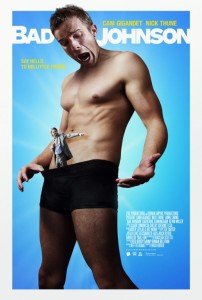 I think we all remember that Bad Milo was a butt dwelling personal hitman. So can it really be a big surprise to hear that Bad Johnson is a film where a man wishes his evil penis away, and said penis appears in the human personification of same to wreak havoc upon his former host’s personal life.

Rich has no con-science

Hates that his dick runs his life

And dick re-turns in guy form

And no jokes to laugh

Rich and dick; a pair of dicks

And I wanted to nut-punch the film when dickless dick Rich finds ‘Real Love’ thanks to him losing his pants pilot.

Final Rating – 5 / 10. When you set out to make a film about how different men are when they think with their zipper, try to show a difference when said influence is removed. This film makes me hate men. 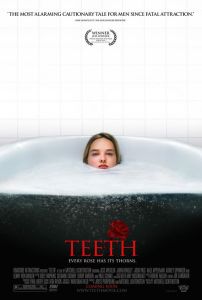 Our last film is just as limited and infinitely creepier, a virginal young woman finds that she has defence mechanisms in the strangest areas that ward off unwanted male attention.

That is kept be-tween her legs…

Each time a gent ven-tures South

Men line up to the ‘bite cave’

Poor old Dawn is a dick magnet in every sense of the word, but a premise this thin can only be stretched so far. That said, if you ever demanded a film about a vagina biting things, then here it is.