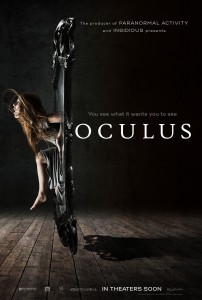 Children who endure severe trauma in their formative years can often grow into troubled adults. It’s both unfortunate and entirely understandable.

So consider a 10 year old who witnesses his father detaining, torturing and ultimately killing his mother, then is forced to kill his father when his menacing intent is redirected toward the youngster and his sister. That’s probably going to leave a mental scar or two.

She blames an antique mirror for not just the two killings, but for dozens – no make that hundreds – more deaths spanning centuries.

Maybe Kayley needs some time to think in a padded environment…

That might come later. For now, Kayley meets Timothy and informs him – on top of the allegations above – that she not only has the mirror in hand, but has been researching, planning and plotting its demise. And with the eradication of the mirror comes not only 7 years bad luck, but absolution from the former crime and a clean slate from now on.

Timothy is nonplussed and noncommittal. He finds it hard to believe that a looking glass can carry diabolical influence to one person let alone many. But Kayley isn’t just blagging on about the mirror, in a lengthy and exceptionally detailed speech she essentially presents a case against it, followed by a scheme involving houseplants, a small pet dog, an anchor, many cameras and lots and lots of water.

With such an intricate and carefully plotted plan nothing could possibly go wrong. So of course it does.

The film cleverly splices flashbacks to the earlier events, of which we already know the end results, but which the flashbacks flesh out and give far more background to. Nearer the end of the film the former events and present attempts start becoming muddied, often leading to confusion as to which reality is being influenced.

There are no cheap scares until near the end. If anything some of the earlier sequences drag a little as the foundation is being set. Let’s just say if Kayley was actually a lawyer the judge would have peered over his glasses and said ‘this better be going somewhere’ more than once.

The subversion of timelines is clever and well developed, but confusing at times, though the film remains taut and suspenseful on first viewing.

It’s hard nowadays for me to find sympathy for a horror movie character. Just as it is difficult to cry for a cow on the way to buy a burger. You might empathise with their plight, and it isn’t their fault that they are pre-determined to have such a depressing fate, but ultimately they perform a duty.

I very nearly felt sorry for what Kayley and Timothy went through, which is a fair feat for such a low budget film, as I can’t recall ever fearing for a movie character since the first run through of The Descent.

Oculus might be a pretty dumb and anti-commercial name, and it might not hold up well to repeat viewings, but it is a pretty fine modern horror flick.

Final Rating – 8 / 10. The quality of the average horror film has increased in recent years. Oculus is one example that helps raise the bar.