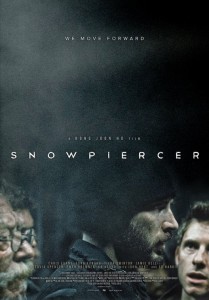 To know Snowpiercer is to know perplexion. To embrace frustration as an inevitable by-product of innovation. At once an ambitious explosion of new ideas and undeniable energy, Snowpiercer is stretched across a familiar framework to those who have experienced Delicatessen and the work of Terry Gilliam; most notably The Fisher King.

You won’t easily forget the end result, but you may be hard pressed to recommend it to others, and also to convince yourself that it merits another viewing.

I actually think a second viewing might be equally polarising, and may either convince you of either the artistic merit or the admirable failure of the project, depending on your viewpoint.

Consider this; later this year the Powers that Be meet and solve Global Warning once and for all. So that’s good. An unfortunate and instantaneous by-product of this ‘solution’ is Global Freezing. Not so good…

As with any detailed examination of Katy Perry’s ‘musical’ career it is far quicker to list the good points to near global extinction instead of the many bad things; and aswith Ms Perry’s career there are only two prominent ‘good points’ (and for the curious among you ‘catchy tunes’ aren’t one of the pair).

The first is that an eccentric Howard Hughes type gazillionaire named Wilford had conveniently just finished his vast new supertrain complete with track covering the entire globe, both of which seem impervious to the cold – somehow – that afflicts 99.9999% of the Earth.

The second is that the supertrain is capable of running and sustaining life indefinitely (we find out the machinations later), and that those aboard cannot be ejected for lacking a ticket. We join the film as the train is about to complete its 18th ‘lap’ of the trainline, which conveniently takes exactly one year to travel. Indeed some passengers have never seen a blade of grass nor a butterly – on the plus side they’ve seen a lot of snow. And never had to worry about what their legs look like in shorts…

Like any mass transit vehicle those on the supertrain are divided in terms of worth. Strange considering that you would think money has no meaning any more. Regardless of quality filters and criteria, those deemed most deserving ride near the front, and those nearer the rear are somewhat less well treated. and, as you would expect, anyone riding in ‘cattle class’ for almost 18 years is likely both a little on edge, and a little gammy.

Curtis (Chris Evans) and Edgar (Jamie Bell) are far enough back to smell the exhaust fumes – if the train had them. And after 18 years of neglect (at best) and mistreatment (more the norm), they conspire to move to the front of the train for an explanation. 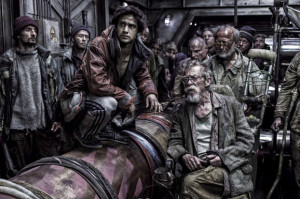 As with any such film it is the journey and not the destination that matters. The well-to-do up front don’t want the huddled masses messing with their chi, and commit several heavily armed and infinitely willing staff to preserving their privilege. Every new carriage is full of different occupants and décor (and seemingly different dimensions), with some bizarrely broad characters among them. I didn’t recognise Tilda Swinton in a prominent role until the credits gave her identity away, despite her being the one character that will stay with you for some time.

Strangely the least memorable character is Curtis. This isn’t actually Chris Evans’ fault but the script that steadfastly refuses to allow him to be any more than a grim square jawed automaton, that is until near the very end when he is granted a chance to perform his Oscar clip speech, and I must admit he acquits himself well. Elsewhere Snowpiercer is fiercely original and filled with countless peripheral characters from both ends of the train, all of whom do their best to stand out.

The film is stylish and bleak, with some extremely violent moments and depressing revelations. It is equally chock full of flaws and logical dilemmas; why does a fast train outrun cold? Why not use some of the more useful looking ‘cattle class’ occupants? Why not simply wipe them out if they are not doing any more than taking up space and using food?

Who keeps the track clear of ice and snow that covers the remainder of the planet???

But in answering these the film would only raise more questions, and likely lose some of the impact near the end by rendering plot points extraneous. I can certainy see why a film with such daring and flourish can have critics fawning and audiences gasping. Equally I can see why same audiences probably aren’t clamouring to rewatch the film, nor to add it to the Blu Ray collection.