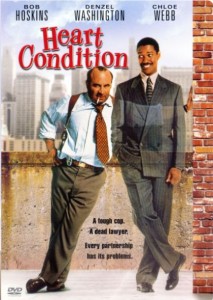 Jack Mooney (Bob Hoskins) has lived a life of vice and indulgence. ‘Sometimes’ food has become ‘always’ food, every hour is happy hour and I guess the anti-smoking movement is yet to have an impact on this diminutive stressed out street cop. (In his defence it was the late 80s)

In fact the only thing healthy about Mooney is his case of racism, and it definitely doesn’t help matters that Napoleon Stone (Denzel Washington) is one particularly slick lawyer.

And a black one. Not only that, he is a slick black lawyer who has taken Mooney’s camera happy ex girlfriend Crystal and turned her into a sleazy high priced hooker.

That’s enough to give anyone’s pulse racing a little quicker. Unfortunately for Mooney his was already in the red, and after a heated confrontation, an impromptu demotion and an unwise binge a massive heart attack puts him at death’s door.

This is where things get kooky.

It seems at the same time Mooney was clutching his chest and gritting his teeth Stone was dying in a car crash. Apparently Mooney’s laziness even prevented him from that one last walk towards the bright light, giving surgeons enough time to replace Mooney’s wheezing ticker with Stone’s otherwise healthy one.

A coincidence of convenience maybe, but this is a movie Jack. Not only does Mooney wake up with a second chance, but he must carry the knowledge that a black man that he hated even beyond mere skin colour provided it. I should also mention Stone’s pushy ghost is along for the ride, determined to have Mooney follow the clues surrounding Stone’s murder to justice.

The only problem is, no-one thinks – or cares – that the quick talking lawyer was murdered, nor do they seem that worried about the death of a high profile politician in suspicious circumstances…

They couldn’t be linked could they?

When you think about it the two men couldn’t be more different. One is a cop determined to uphold the law, the other profits from criminal activity. One is a slick, fast talking and handsome, the other is Bob Hoskins. One is black and dead, the other white and alive… But still in bad shape.

Stone’s first mission is to have Mooney fit into what was recently his world, so the inevitable montage of being fitted for a suit, having a makeover and scoring the sweet car ensues.

The rest writes itself, and the investigation will test both Mooney’s bigoted opinions and the robustness of his new heart.

Heart Condition isn’t that terrible. Sure it’s not especially hilarious at any stage and action is scarce, but the effects are as good as the late 80s could produce and the plot as mature as you could expect from a mismatched buddy movie featuring a ghost. Probably too mature, the movie doesn’t shy away from racism and drug addiction, and some scenes are pretty harrowing. Will Smith would never make this movie. Not this way. Neither would any number of big name Hollywood stars.

And after it tanked fully at the box office, Denzel immediately sacked his agent, ensuring hetoo  would never make such a movie again.

Final Rating – 6.5 / 10. Denzel’s made worse. You see many worse films every single year. Heart Condition might not be fit enough to run a marathon, but it’s a long way from needing those zapper pads with some guy to the side yelling ‘clear’!