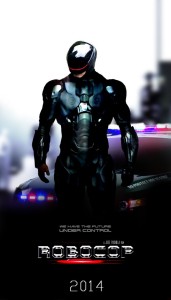 Robocop 1.0 was released to the world in 1987. It was an R rated movie in that kinda, sorta, not really way. Like Jessica Simpson might have thought of herself as a respected singer; while the pubic thought kinda… sorta…

But as a mid-teen just finding the bravery to venture into R rated territory (thanks to a mate who worked at a video shop), Robocop was an experience; “Hey that guy melted!” “Wow they shot his arms and legs off!” “Oh man you only have seconds to comply!”

It was OMG before OMG was invented, thanks to the director Paul Verhoeven’s ‘nothing is too far’ aesthetic and penchant for hooky lines and striking visuals.

Now, a quarter century plus on (I know right?), that film isn’t nearly so incredible. Sure the lousy sequels didn’t help, but in retrospect the first was a deeply flawed piece relying on those few notable moments to gain unearned fond memories.

And now no-one’s favourite pewter peacekeeper is back. I understand why, the concept is quite delicious. But this is very much Strike Two.

In the future robots walk our streets. They keep the peace and let flesh and blood police stay back out of harm’s way. Strangely the criminals and enemy forces never think to get robots of their own – but whatever.

Only in America, politicians won’t allow their existence, preferring beings with emotions and stuff. This pisses off the police who are tired of being shot at, and the big conglomerates who see profits to be made.

A loophole is found when good honest family man – and cop – Murphy, is blown up. Shredded is probably more accurate. The brains trust figures if (the remaining bits of) Murphy are integrated into a robotic frame, then it’s a win-win. Well not so much for Murphy, but won’t someone think of the shareholders!?!

Big Business wants him on the streets and kicking ass, so the production lines can start churning out more at the bargain price of $99,999,999 or so. Team Science wants Murphy’s humanity considered more thoroughly, but also wants to see their creation being of benefit to society. Marketing and Tech contemplate the possibilities and fine tune the angles; this baby needs to sell. The Media takes both pro and con sides and lazily beats both to death – and ratings.

Each party above is embodied and represented by a talking head; Michael Keaton, Gary Oldman, Jay Baruchel and Sam L Jackson respectively. And talk is all these guys do. And talk. And talk. Yammering away at such pointless arguments and ridiculous lines of logic that you wonder just how anyone ever gets things done in such situations.

For an interminable time, while they talk old Robo-Murphy sits perched on his stand like Woody awaiting a makeover in Toy Story 2, while his wife remains at home, emerging periodically at timely moments to strategically place her hand over her latest aghast expression.

Then you look up and 80 minutes have elapsed.

My gripe in Robocop 87 and the two awful sequels, was that every film was too much robo-not enough cop. A quarter century might have passed since, but nothing has changed.

Also most definitely not helping is the conversion to PG, and the determination to force callbacks from the first film here. I almost cried during a Call of Duty style simulation when one guy says “I wouldn’t buy that for a dollar”. I DID CRY when I saw just how pathetic the ‘Good cop, Robocop’ line was in the finished film – and it was piss poor in the trailer.

It’s ironic that a film centring on how humanity is compromised by ruthless businessmen in search of profit, is itself diluted beyond repair by diluting the action and violence in search of the profitable teen audience.

Of course a hard core, violent, over the top Robocop would no doubt please teenagers far more than this lightweight nonsense, but they wouldn’t be paying for the film. And that’s not what Big Business wants…

Instead they’ll rock up to the cinema in their pimply hordes, spending mum and dad’s money for an underwhelming Friday night. Like Robocop itself it won’t be competent, worthwhile or rewarding, but then this film isn’t for the teens – it’s for the studio.

The efficient, unfeeling… hell the robotic studios who favour profit over effectiveness.

Final Rating –  5.5 / 10. A quarter century has seen incredible advances in both technology and law enforcement, but not in films about them.