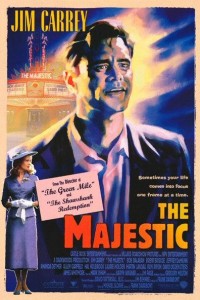 Peter Appleton (Jim Carrey) is a Hollywood scriptwriter. Or he was. Sacked, dumper and blacklisted all in the same day as a result of Hollywood’s communist witch hunt in the 1950s, Appleton deals with his bad day in an understandable way, by getting blind drunk and getting out of town for a while.

It is the rest of the film that cannot be understood.

A car accident ruins Appleton’s already abysmal day. He awakens in a foreign environment with no recollection of his own past. Found by a hiker and taken to a nearby town to be checked out, the locals find this newcomer strangely familiar. Perhaps the most familiar of all is Harry (Martin Landau), who summarily claims him as his own son, lost long ago in the war and presumed dead.

Despite no memory of his own Appleton – now known as Luke – moves in with the old man in his home above a rundown movie theatre named… The Majestic, though the name seems somewhat inapt given its rundown state.

Within days Luke decides to resurrect the theatre and rediscovers the woman that once loved him. Meanwhile the government have not given up on their pursuit of this supposedly dangerous communist threat, even though you wonder how the hell they find an unnamed guy who doesn’t even know that he is hiding, and similarly wonder why a guy with one B movie scriptwriting credit is that dangerous in the first place.

The Majestic is cliched, clumsy and built on a deeply flawed and fractured premise. It starts boring, becomes saccharine and ends equal parts bombastic and stupid. The one constant throughout is that it always feels loooong…

(It’s the stupid part that annoyed me. I can deal with boring and saccharine to a point.)

Final Rating – 5 / 10. Many words describe The Majestic, unfortunately not the one in the title.