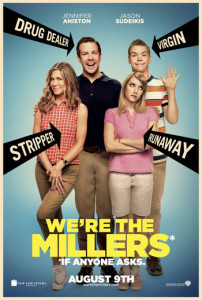 We’re the Millers is ‘edgy’ in the same way Pink makes alternative music and Miley Cyrus is dangerously raunchy. The descriptors only work when followed by ‘when compared to things that are quite obviously not’.

Sure when you only consider things superficially – and when does Hollywood not do that? – here is a film diving headlong into potentially subversive waters. A group of disparate and unrelated individuals feign familial unity in order to smuggle illicit substances across the Mexican border, with the goal being to split the proceeds and/or avoid being killed by wealthier, more powerful drug dealers.

But like a grenade shaped cigarette lighter the first glance is where the real danger ends.

Here is a film with a most amiable and understanding drug dealer, a reluctant and clean living stripper and a reasonably agreeable and not very promiscuous teen slut. If those descriptions seem unlikely juxtapositions in the first place, is it a surprise when the inevitable ‘I need to sort myself out’ realisation arrives that you wonder why it took this damn long? (even when in reality each one of them only has to make minor changes to join respectable society).

And as for the fourth guy on the poster. He’s the ‘when compared to things that are quite obviously not’ guy. The witless virgin who is only called upon to feign being shocked when Jennifer Aniston says ‘fuck’ or the chat goes into racy territory… In the minds of middle aged women. He’s the guy on the panel show who gasps incredulously and shakes their head when someone mentions that they actually know people who are racist…

In other words he is the silent voice of non-reason.

We’re the Millers has some potty talk, some anti social behavior and yes, some adult situations. That is if you call a 40 something Aniston stunt double dancing around like every single back up dancer in a music video, only way less so and with more clothing.
There are chuckles but no laughs. A couple eyebrows might elevate but never in shock. The delightful misunderstandings aren’t as delightful as they want to be, and the inconceivable coincidences so very expected it’s underwhelming.

After several such minor inconveniences the ‘Millers’ run into a decidedly ‘straight’ couple in order to continue the misunderstandings and ‘danger; by comparison’ theme, as if the dead horse wasn’t already flogged enough.

The most alarming ‘by comparison’ though arrives after the film proper departs. When the blooper reel kicks in seconds after the credits arrive – and provides by far the two funniest minutes in the last two hours – you realise again; ‘by comparison’ just how bland and beige the previous 118 odd minutes were.

We’re the Millers might keep Jennifer Aniston on magazine covers and on the lips of middle aged women, but it’s most dangerous moments are all on the trailer, and it’s funniest minutes aren’t even part of the main movie.

Final Rating – 6 / 10. The racy film you can watch with your parents. And grandparents. Yes it’s that dangerous.